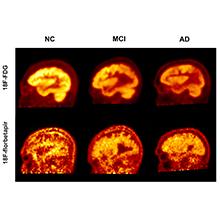 Philadelphia, PA, USA – While the presence of beta-amyloid plaques in the brain may be a hallmark of Alzheimer’s disease, giving patients an amyloid PET scan is not an effective method for measuring their cognitive function, according to a new study from researchers in the Perelman School of Medicine at the University of Pennsylvania and Thomas Jefferson University. The researchers concluded that fluorodeoxyglucose (FDG) PET, which measures the brain’s glucose consumption as a marker of neural activity, is a stronger approach for assessing the progression and severity of Alzheimer’s and mild cognitive impairment (MCI) as compared to florbetapir-PET scans, which reveal amyloid protein deposits in the brain. This suggests that FDG-PET is also a better means for determining the effectiveness of Alzheimer’s therapies, as well as tracking patients’ disease advancement, in both clinical and research settings.  Results of this study are detailed in the August issue of the Journal of Alzheimer’s Disease.

“Both florbetapir-PET and FDG-PET are approved diagnostic methods for Alzheimer’s disease, and both appear to be effective in indicating some sort of cognitive impairment. However, we have now shown that FDG-PET is significantly more precise in clinical studies, and it is also available for routine use with modest costs,” said the study’s co-principal investigator Abass Alavi, MD, PhD, a professor of Radiology at Penn. “Our results support the notion that amyloid imaging does not reflect levels of brain function, and therefore it may be of limited value for assessing patients with cognitive decline.”

Alzheimer’s disease, the most common cause of dementia, is the sixth leading cause of death in the United States, affecting up to 5.8 million Americans currently. As clinicians aim to spot and treat the symptoms of dementia in its earliest stages, PET plays an increasingly pivotal role in diagnosing and monitoring Alzheimer’s disease, as well as MCI, a condition that often precedes dementia.

Two of the most significant biomarkers found in Alzheimer’s are decreased glucose uptake and the accumulation of amyloid plaques in the brain. PET scans use different radioactive drugs, called radiotracers, to measure these biomarkers within the brain tissue of patients with cognitive impairment. FDG-PET is one of the most commonly used imaging techniques to diagnose Alzheimer’s. However, in recent years, several other radiotracers, such as florbetapir, have been developed to detect the deposition of amyloid plaques.

Recently, the effectiveness of amyloid imaging as a strategy for monitoring dementia symptoms has been called into question. While the presence of amyloid plaques in the brain is considered as being characteristic of Alzheimer’s, some studies have shown that large amounts of amyloid plaques were present in healthy, non-demented individuals. Conversely, recent clinical trials have shown that the intended removal of amyloid from the brains of patients with Alzheimer’s disease led to no change in, or even worsened, cognitive performance.

In this study, the researchers evaluated 63 individuals, including 19 with clinically diagnosed Alzheimer’s disease, 23 with MCI, and 21 healthy individuals. The study participants underwent both FDG- and florbetapir-PET imaging. They were then assessed with a Mini Mental Status Examination (MMSE), a widely used diagnostic test for detecting and assessing the severity of cognitive impairment. The researchers used a novel “global quantification approach” to generate data from five different regions of the brain, which were correlated with the results from the MMSE scores.

The study revealed that both FDG- and florbetapir-PET scans are able to effectively discriminate the individuals with dementia from the healthy control group. However, when compared with the MMSE scores, the correlation between low cognitive performance and high levels of amyloid was significantly weaker than the correlation between FDG and low cognitive performance for all groups included in the study. This suggests that FDG-PET is a more sensitive indicator of cognitive decline.

“Amyloid imaging has a value in diagnosing or ruling out Alzheimer’s disease, but it’s a bit like all or nothing. Our study shows that it can reveal disease, but you wouldn’t be able to differentiate between someone who had very mild or very severe symptoms,” said co-principal investigator Andrew Newberg, MD, a professor of Radiology at Thomas Jefferson University, who added that these findings have important implications for clinical research.

“In a clinical drug trial, for example, it may be more relevant to do an FDG-PET scan, rather than using amyloid as a marker, to find out whether the therapy is working,” Newberg said.

While FDG-PET may not be a perfect diagnostic tool, the study confirms that currently it is the best available method for monitoring symptoms of dementia, according to Alavi.

“Right now, FDG is king when it comes to looking at brain function, not only in Alzheimer’s disease, but also diseases like vascular dementia and cancer,” Alavi said.

About Penn Medicine
Penn Medicine is one of the world’s leading academic medical centers, dedicated to the related missions of medical education, biomedical research, and excellence in patient care. Penn Medicine consists of the Raymond and Ruth Perelman School of Medicine at the University of Pennsylvania (founded in 1765 as the nation’s first medical school) and the University of Pennsylvania Health System, which together form a $7.8 billion enterprise. The Perelman School of Medicine has been ranked among the top medical schools in the United States for more than 20 years, according to U.S. News & World Report's survey of research-oriented medical schools. The School is consistently among the nation's top recipients of funding from the National Institutes of Health, with $405 million awarded in the 2017 fiscal year. The University of Pennsylvania Health System’s patient care facilities include: The Hospital of the University of Pennsylvania and Penn Presbyterian Medical Center – which are recognized as one of the nation’s top “Honor Roll” hospitals by U.S. News & World Report – Chester County Hospital; Lancaster General Health; Penn Medicine Princeton Health; Penn Wissahickon Hospice; and Pennsylvania Hospital – the nation’s first hospital, founded in 1751. Additional affiliated inpatient care facilities and services throughout the Philadelphia region include Good Shepherd Penn Partners, a partnership between Good Shepherd Rehabilitation Network and Penn Medicine, and Princeton House Behavioral Health, a leading provider of highly skilled and compassionate behavioral healthcare. Penn Medicine is committed to improving lives and health through a variety of community-based programs and activities. In fiscal year 2017, Penn Medicine provided more than $500 million to benefit our community.