We read with interest the article by Hernández et al. on the TMEM106B genetic variant rs1990622 that modifies the risk for frontotemporal dementia (FTD) [1]. Although the authors were underpowered to detect a significant association with FTD risk in their case-control study (n/N=146/381), the effect was concordant with the expected direction and slightly decreased in p-value under a recessive model. Similarly, meta-analysis of published data was more significant assuming a recessive effect for the rs1990622 CC genotype.

Previously we showed that the additive effect of rs1990622 is not restricted to FTD but that this variant also affects brain structure in the general population free of dementia [2]. Given the findings of Hernández et al. [1], we aimed to determine whether this recessive model also holds for the association of rs1990622 in the general population. In line with our previous publication, we investigated this question in 4,413 non-demented and stroke-free participants from the population-based Rotterdam Study who underwent both genotyping and magnetic resonance imaging [3-4]. The eight brain structures that previously survived multiple testing correction were analyzed under three different models: additive (as published), recessive, and dominant. All analyses were adjusted for age and sex.

As shown in Table 1, associations under both the recessive and dominant model were either in the same order of magnitude or less significant than the additive model. This does not support the notion of a recessive effect, as found by Hernández et al. [1], in our population-based sample in which we investigated brain structure. Rather, it seems to suggest that each T allele increase confers an additional risk. We agree with the authors that larger studies will provide us the definitive answer with regard to the genetic model under which rs1990622 predisposes to FTD. 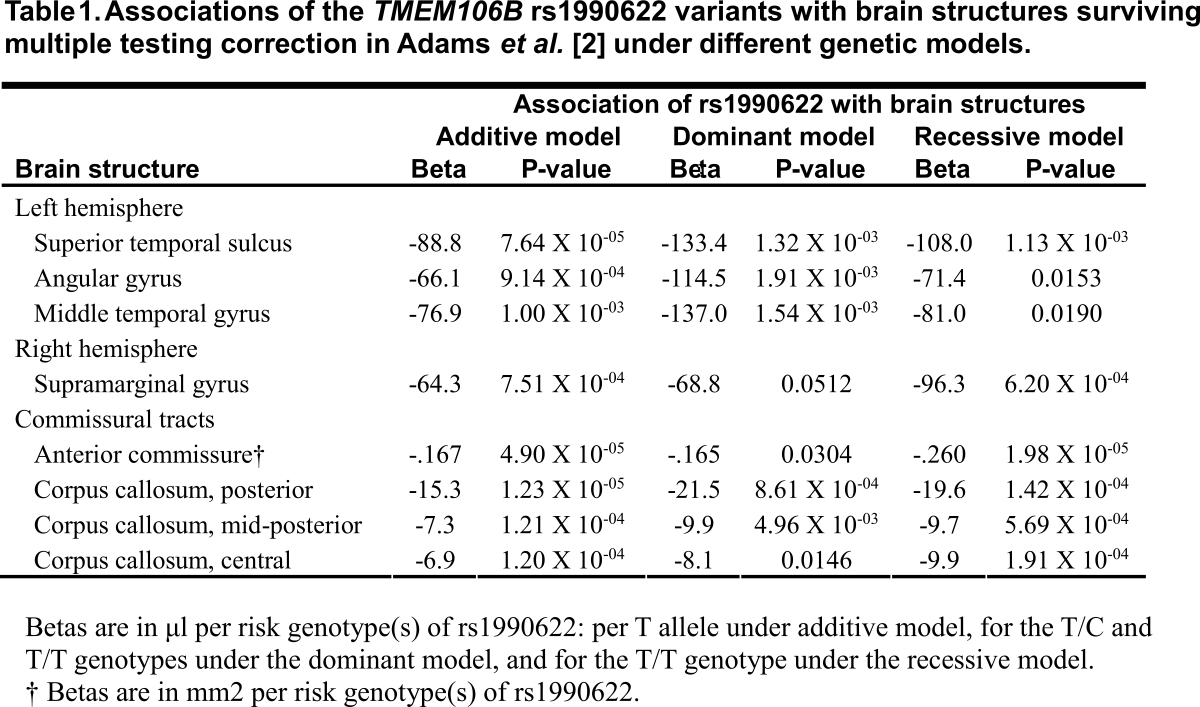 We acknowledge the interest of Adams et al. in our observations regarding the genetic model behind rs1990622 and its associated risk for frontotemporal dementia (FTD). In our recent work [1], we tried to explore the genetic model behind the association of rs1990622 marker in FTD subjects beyond the conventional method (mainly additive model) usually applied in genome wide association studies. We found the autosomal recessive model as the most promising to explain the risk effect of rs1990622 in our FTD cohort. Considering currently available results, we agree that other genetic models, including the additive model, cannot be excluded for this association.

Adams et al. observed that rs1990622 variant can affect brain structure volume in the general population in a dose-dependent manner [2]. Unfortunately, after the authors reanalyzed their data, the recessive model did not explain the observed effects of rs1990622 in brain volume.

Taking into account the new results provided in this letter by Adams et al., which are based on large numbers, we have elaborated the following hypothesis. On the one hand, if we assume that TMEM106B rs1990622 variant has a common genetic mechanism for both phenotypes (brain structure volume and FTD risk), the additive model would be the most plausible. Consequently, the better performance observed with the recessive model in our study could be attributable to a mere random chance. If this is true, TMEM106B rs1990622 could be catalogued as a general resilient genetic factor for different neurodegenerative disorders including FTD. On the other hand, taking into account the rarity of FTD in the general population, the observed familial aggregation of this trait and its early age at onset, the “double” dose effect of TMEM106B locus could be critical for the very specific pathological process of FTD. Under this scenario, both observations could be true and compatible. TMEM106B alleles could exert a dose-dependent general effect on the brain volume structures in the general population, and a genuine recessive protective effect (exclusively related to FTD risk) by reducing the penetrance of FTD mutations only in very specific genetic backgrounds.

Unfortunately, there is not enough information available to clarify the exact observed discrepancies. Therefore, in agreement with the conclusions of Adams et al., further research is necessary to discern on the genetic model under which rs1990622 confers FTD risk.