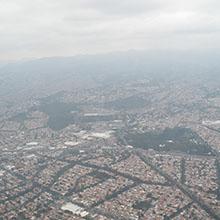 Missoula, MT — A new study by researchers at the Universities of Montana, Valle de México, Boise State, and North Carolina, the Centro de Ciencias de la Atmósfera, Universidad Nacional Autónoma de México, Instituto Nacional de Pediatría, and Centro Médico Cozumel heightens concerns over the detrimental impact of air pollution on hippocampal metabolites as early markers of neurodegeneration in young urbanites carrying an allele 4 of the apolipoprotein E gene (APOE). This is associated with the risk for Alzheimer disease (AD) and a susceptibility marker for poor outcome in traumatic brain injury (TBI) recovery. These findings are published in the Journal of Alzheimer’s Disease.

Mexico City children and their parents have lifetime exposures to concentrations of air pollutants above the current USA standards, including fine particulate matter (PM 2.5). Metropolitan Mexico City is an example of extreme urban growth and serious environmental pollution and millions of children are involuntarily exposed to harmful concentrations of PM 2.5 every day since conception.

This study focused on children (n: 57, 12.4±3.4 years) and one parent (n: 48, 37.5±6.7 years) sharing the same APOE allele (either allele 3, 3/3 the most common genotype, with no Alzheimer risk factor or allele 4, 3/4 or 4/4 associated with AD risk, increased levels of cholesterol, triglycerides, and low density lipoproteins along with development of coronary heart disease and atherosclerosis). Researchers focused on the hippocampus, a key structure involved in higher cognitive function, particularly memory processes, and certain affective behaviors. Three major brain metabolites in the hippocampus were measured in each child/parent pair using proton magnetic resonance spectroscopy. The right hippocampus NAA/Cr ratio, reflective of neuronal density and functional integrity, was significantly decreased in Mexico City APOE ε4 children versus children exposed to low pollution. The left hippocampus NAA/Cr ratio of Mexico City APOE ε4 parents was significantly different than their children, with the lowest values seen in parents.

Researchers are very concerned by the young age of the children with evidence of a spectral marker of neurodegeneration that is often seen in adults with mild cognitive impairment, in Alzheimer patients and in mouse models of Alzheimer’s disease.

“APOE ε4 is likely playing a role in Mexico City children’s response to their cumulative air pollution exposures. Of importance for health and educational issues, Mexico City children’s detrimental hippocampal responses will likely have a negative impact on academic achievement and social development,” said Dr. Lilian Calderon-Garcidueňas. “The effects of poverty, urban violence and air pollution-related stress on impaired cognitive skills are also very important for the developing brain and can’t be ignored.”

“These results add to growing data suggesting APOE ε4 carriers could have a higher risk of developing early AD if they reside in a polluted urban environment, and unfortunately this statement applies to individuals all around the world with high exposures to air pollutants regardless of ethnicity,” added Dr. Calderón-Garcidueňas. The combined effects of residency in a highly polluted city, poor nutrition, urban stress, lower brain and cognitive reserves, and APOE ε4 could lead to an acceleration of neurodegenerative changes.

Air pollution is a serious public health issue and exposures to concentrations of air pollutants at or above the current standards has been linked to neuroinflammation and neurodegeneration. In the USA alone, 200 million people live in areas where pollutants such as ozone and fine particulate matter exceed the standards. Jung et al., 2015 found a 138% risk of increase of AD per increase of 4.34 μg/m3 in PM 2.5 suggesting long-term exposure to PM 2.5, as well as ozone above the current US EPA standards are associated with increased risk of Alzheimer’s disease.

There is an urgent need for a broader focus on APOE ε4 and air pollution interactions impacting children’s brains and their responses, which could provide new avenues for Alzheimer’s disease prevention. The authors concluded: “We have a 50-year window of opportunity between the time urban children experience the detrimental effects we are describing here and when they will present with mild cognitive impairment and dementia. APOE ε4, the most prevalent genetic risk factor for AD, has been understudied in children and teens. Our efforts should be aimed to identify and mitigate environmental factors influencing Alzheimer’s disease and to neuroprotect high risk children. Unfortunately, to date there has been little support for studying the detrimental effects of air pollution on the pediatric brain.”