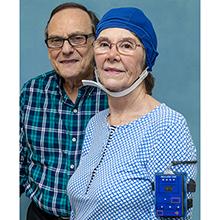 Phoenix, AZ, USA – There is finally some encouraging news for the millions of Americans suffering from Alzheimer’s disease. NeuroEM Therapeutics today announced findings from an open label clinical trial showing reversal of cognitive impairment in Alzheimer’s Disease patients after just two months of treatment using the company’s wearable head device for in-home treatment. Results demonstrate that TEMT was safe in all eight participating patients with mild to moderate AD and enhanced cognitive performance in seven of them, as measured by their ADAS-cog score, which is the benchmark for testing AD therapeutics. The open access study is published in the new issue of the Journal of Alzheimer’s Disease.

For the present clinical study in humans, the investigators used the same treatment (twice daily for 1-hour) through creation of NeuroEM’s first-in-class MemorEMTM head device. The device has multiple, highly-specialized emitters positioned within a head cap that are activated sequentially, with treatments easily administered in-home by the patient’s caregiver. As well, the device allows for near complete mobility to perform nearly all household activities during treatments.

“Perhaps the best indication that the two months of treatment was having a clinically-important effect on the AD patients in this study is that none of the patients wanted to return their head device to the University of South Florida/Byrd Alzheimer’s Institute after the study was completed,” said Dr.Gary Arendash, CEO of NeuroEM Therapeutics. One patient even exclaimed: “I’ve come back.”

The investigators indicated they have strong evidence that TEMT is directly affecting the Alzheimer’s disease process by easily penetrating the brain and brain cells to break up aggregates of two toxic proteins inside brain cells called A-beta and tau.

TEMT’s ability to disaggregate both toxic proteins inside brain cells (neurons) appears to be key to stopping and reversing the cognitive loss of AD. Present AD drugs in clinical trials have great difficulty getting into the brain and then into brain cells. Even if they succeeded in doing so, they do not yet have the capacity to target the small aggregates of A-beta and tau proteins that appear to be causative to AD.

NeuroEM Therapeutics is planning for a pivotal clinical trial to begin recruitment of approximately 150 mild/moderate AD subjects later this year for treatment with the company’s MemorEMTM device. If that trial shows continued safety and cognitive benefits, NeuroEM Therapeutics plans to ask the FDA for approval of the MemorEM device for treatment of AD. The clinical locations for this multi-site trial have not yet been determined.

“Despite significant efforts for nearly 20 years, stopping or reversing memory impairment in people with Alzheimer’s disease has eluded researchers,” said co-author Amanda Smith, MD, Director of Clinical Research, University of South Florida Health, Byrd Alzheimer’s Institute, the clinical center for the study. “These results provide preliminary evidence that TEMT administration we assessed in this small AD study may have the capacity to enhance cognitive performance in patients with mild to moderate disease.”

After two months of treatment administered at home by their caregivers, none of the eight patients in the study exhibited any deleterious side effects on behavior or physiologic measures, as recorded by caregivers in daily diaries. Moreover, post-treatment brain scans revealed no visible induction of tumors or brain bleedings called microhemorrhages.

Using the benchmark ADAS-cog task to assess a variety of cognitive measures, seven of the eight AD patients collectively responded to treatment with a 4+ point increase in cognitive performance by the end of the 2-month treatment period – the results indicate a very large and clinically-important effect.

Since AD patients typically show a 4+ point decline in ADAS-cog performance over a given one year period, the 4+ point improvement provided by TEMT was as if the treated patients had gone back in time to their better cognitive performance of one year earlier.

“We were particularly surprised that this highly significant improvement in the ADAS-cog was maintained even two weeks after treatment was completed”, stated Dr. Arendash. “The most likely explanation for continued benefit after cessation of treatment is that the Alzheimer’s disease process itself was being affected.

Cognitive abilities were improved in other tasks as well, such as the Rey AVLT task, wherein clinically important increases in word recall were present after treatment for 2 months and at two weeks thereafter. Even a 50% reduction in forgetting was observed in this important task.

In addition to cognitive assessment, the study also involved analysis of AD markers in both the blood and the cerebrospinal fluid (CSF) before and at the end of the 2-month treatment period. These AD markers were changed in directions expected for TEMT disaggregating the two toxic proteins (A-beta and tau) that appear to be the disease’s root causes.

The investigators believe that TEMT may be an entirely new therapeutic intervention against Alzheimer’s disease and that NeuroEM’s bioengineering technology may be succeeding where drug therapy against this devastating disease has thus far failed.

Based on the findings and the enthusiasm for continued treatment that all patients expressed, patients were offered and accepted continued TEMT in a now on-going extension study averaging 17 months between initial study start and extension study finish. More information about both the completed and on-going clinical trials is available at NeuroEM’s website (neuroem.com). 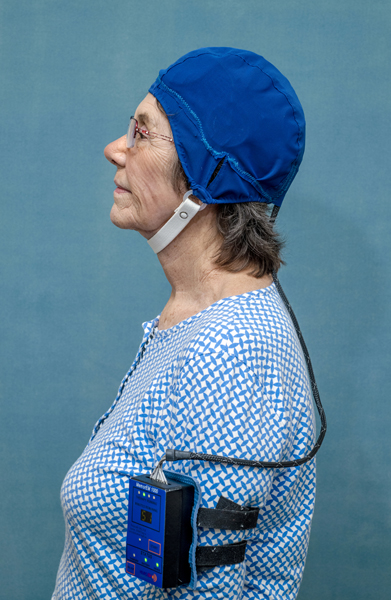 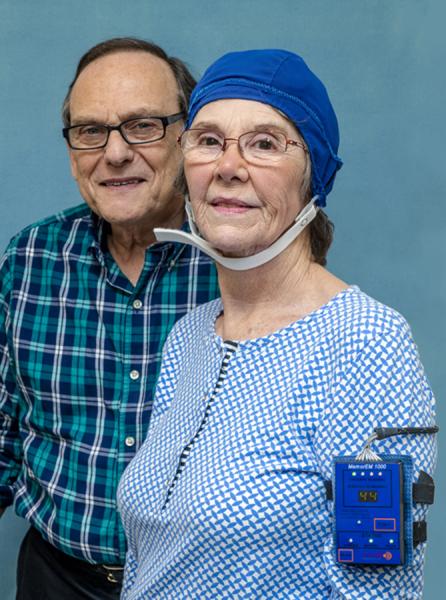 Caption: Janet Sizeler, who underwent a transcranial electromagnetic treatment for AD in a clinical trial, is pictured wearing the MemorEM head device with her husband Larry Sizeler.

More Information About the Study
The open-label study was a single center, single arm trial in eight patients 63 years of age and older with mild to moderate Alzheimer’s disease (AD) to evaluate the safety and initial efficacy of Transcranial Electromagnetic Treatment (TEMT). Patients were enrolled at the University of South Florida Health/Byrd Alzheimer’s Institute, which also conducted most clinical study assessments. Treatment was administered in the patient’s home by a caregiver (spouse, relative), using the MemorEM device. Patients received TEMT for one-hour periods twice daily for two months. Although limitations of this study include the small number of subjects, not having a control group, and being of relatively short treatment duration, 120 treatments were administered in-home and the cognitive benefits observed were clinically important/meaningful at the highest levels. Providing additional credibility to the observed cognitive enhancements were the beneficial changes in AD markers in blood and CSF, as well as the enhancement in brain MRI imaging.

About Alzheimer’s Disease
Alzheimer’s disease (AD) is a progressive and ultimately lethal brain disease leading to memory loss, language problems and other serious symptoms. AD is caused by the damage or destruction of brain cells (neurons) in parts of the brain that control thinking, learning and memory. Over time, people with AD increasingly become limited in performing daily activities and eventually become bed-bound, requiring continuous care. AD is the sixth leading cause of death in the U.S. An estimated 5.8 million Americans are living with the disease. By 2050, this number is projected to more than double to 14 million. In 2019, AD and other dementias will cost the U.S. $290 billion. By 2050, these costs could rise to $1.1 trillion per year.

About NeuroEM Therapeutics, Inc.
NeuroEM Therapeutics is a clinical stage medical device company focused on development of Transcranial Electromagnetic Treatment (TEMT) to treat neurodegenerative disorders such as Alzheimer’s Disease, Traumatic Brain Injury, and Parkinson’s Disease. The company is headquartered in Phoenix, AZ and has obtained research support from the NIH, a prominent charitable foundation, and angel investors. NeuroEM’s head device (the MemorEMTM) is a first-in-class medical device that provides full brain electromagnetic treatment in-home and with near complete mobility. For more information about NeuroEM Therapeutics and this new bioengineering technology, go to: neuroem.com.