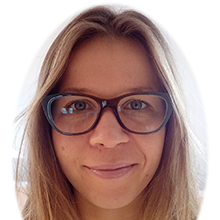 Mossakowski Medical Research Centre Polish Academy Of Sciences - A new study suggests an association between overactive and cytosolic BRCA1, the major guardian of genomic stability, and neurons death in Alzheimer's disease (AD). Upregulated BRCA1 is associated with both aberrant DNA damage response (DDR) and dysfunction of presenilin 1 (PS1). The findings support the hypothesis that genotoxic stress manifested among others by activation of DDR and destabilization of cell cycle checkpoints cause neuronal death in Alzheimer's disease.

AD is a neurodegenerative disorder manifested by a significant, progressive loss of neurons and their synaptic connections, ultimately leading to a severe impairment of cognitive functions. The critical pathogenic factor in AD is beta-amyloid deposited as amyloid plaques in the late stage of the disease, but extremely dangerous in the form of oligomers already in the earlier stages of the disease. On the other hand, it is known that genotoxic and oxidative stress are the main factors inducing molecular pathways that drive neurons to death, resulting in a significant loss of brain mass.

A joint Polish and Swedish study published in the Journal of Alzheimer's Disease aims to identify the molecular factor linking the amyloid and oxidative stress theory in the pathogenesis of AD.

"BRCA1 appears to be new important player underlying molecular bases of neuronal death in Alzheimer's disease. BRCA1 is overactivated and re-localized to the cytosol, which is abnormal for its functions in DNA repair. On the one hand, BRCA1 can be involved in the induction of cell cycle re-entry of post-mitotic neurons, which leads them to pro-death signalling. On the other hand, BRCA1 as a player of the proteasome degradation system may be involved in aberrant processing of presenilin 1 involved in the deposition of pathogenic peptides of beta-amyloid." - said the first author, Michalina Wężyk, PhD, senior post-doc at the Mossakowski Medical Research Center. "BRCA1 may thus constitute a molecular link between amyloid pathology and oxidative stress with its consequences in Alzheimer's disease brain." - she continues.

Researchers obtained data from cell lines of skin fibroblasts and induced pluripotent stem cells-derived neurons established from early-onset Alzheimer's disease patients. Patients were recruited at the Central Clinical Hospital of Ministry of the Interior and Administration in Warsaw, Center of Alzheimer's Disease of Wroclaw Medical University and Poznan University of Medical Sciences. Cell lines were established at Mossakowski Medical Research Center and at Karolinska Institutet, in a collaboration with Dr. Anna Falk Laboratory. The examined group included six EOAD patients, between 36 and 58 years old and sixteen cognitively normal men and women, between 55 and 81 years old, neuropsychologically healthy and with no family record of neurological disorders.

The team found an increased content of cytosol re-localized and abnormally overactive BRCA1 protein in fibroblasts and AD neurons. This correlated with the accumulation of beta-amyloid, observed especially in neurons, as well as with altered cellular localization and altered processing pattern of presenilin 1 (increased ubiquitination). The results suggest that BRCA1 may interact or affect the processing and consequently the functions of presenilin 1. On the other hand, activation BRCA1 correlated with the recruitment of many players to DNA damage response and cell cycle checkpoints, observed in fibroblasts and partially in neurons (evaluated based on the activation of some markers of re-entry to the cell cycle). These results indicate a dual mechanism of action of BRCA1 - both at the level of amyloid processing and at the level of the response to genotoxic / oxidative stress occurring in neurons in Alzheimer's disease. These studies indicate numerous cell cycle regulatory elements, which are deregulated in the neurodegeneration process. Therefore, these studies go hand in hand with the growing trend of the reverse correlation between the chance of getting cancer and the neurodegenerative disease.

Wezyk and colleagues point to a further need for research to identify possible therapeutic applications targeting BRCA1 depending on the different stages of Alzheimer's disease, especially at its very early onset.

Graphical presentation of the research: 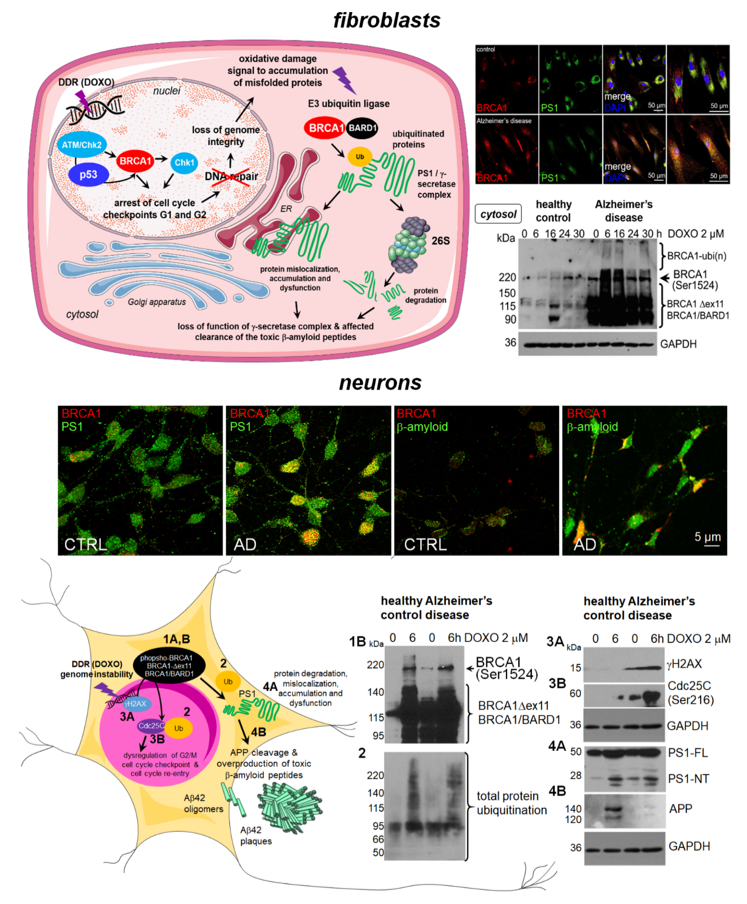 FUNDER
This work was supported by Polish National Science Centre grant "SONATA6" no. G11192013/09/D/NZ3/01348 and Statutory Grant at MMRC from Ministry of Science and Higher Education.