Changes in humour may be an early sign of dementia 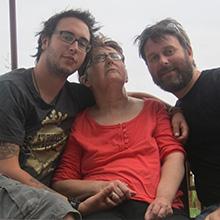 Researchers at University College London (UCL) have revealed that a change in sense of humour could be an early sign of dementia. The findings could help improve dementia diagnosis, by highlighting changes not commonly thought to be linked to the condition. The study was funded by Alzheimer’s Research UK, the Wellcome Trust, Medical Research Council (MRC) and NIHR Queen Square Dementia Biomedical Research Unit. The research was published in the Journal of Alzheimer’s Disease on 10 November 2015.

The research team was particularly interested in how sense of humour can change in frontotemporal dementia (FTD) and Alzheimer’s disease. While Alzheimer’s disease is the leading cause of dementia, frontotemporal dementia is the most common cause of dementia in the under-55s. Unlike in Alzheimer’s, memory difficulties are not an early indicator of FTD. Rather, people tend to experience behaviour and personality changes before they develop problems with memory. The research team wanted to explore these behavioural symptoms, to reveal early clues of underlying brain changes and aid diagnosis.

Because sense of humour is such an important part of our personalities and our dealings with other people, the research team focused on shifting preferences in comedy genre in people with dementia. Using a series of questionnaires, they asked friends or relatives of 48 people with different forms of FTD and Alzheimer’s to rate their loved one’s liking for different kinds of comedy. This included slapstick comedy such as Mr Bean, satirical comedy such as Yes, Minister or absurdist comedy such as Monty Python. The researchers also asked those completing the questionnaire to say whether they had noticed instances of inappropriate humour. As well as collecting data about current humour preferences, the team asked the friends and relatives to reflect on the past 15 years – well before any of the study volunteers received a diagnosis – to identify any shifts in preference.

The team found that people with behavioural variant FTD – a particular form of FTD associated with behavioural changes – had an altered sense of humour compared to those with Alzheimer’s disease and healthy individuals. This included laughing at events others would not find funny such as a badly parked car or barking dog. The questionnaires and anecdotes revealed that people with bvFTD frequently laughed inappropriately at tragic events on the news or in their personal life. This did not happen in people with Alzheimer’s.

The researchers found that people with both bvFTD and Alzheimer’s tended to prefer slapstick humour to satirical and absurdist humour when compared with healthy people of a similar age. In fact, friends and relatives reported seeing these changes an average at least nine years before the start of more typical dementia symptoms. This highlights that changes in humour are not only an early feature of FTD, but may also occur in Alzheimer’s.

“As sense of humour defines us and is used to build relationships with those around us, changes in what we find funny has impacts far beyond picking a new favourite TV show. We’ve highlighted the need to shift the emphasis from dementia being solely about memory loss. These findings have implications for diagnosis – personality and behaviour changes should be prompts for further investigation, and clinicians themselves need to be more aware of these symptoms as a potential early sign of dementia. As well as providing clues to underlying brain changes, subtle differences in what we find funny could help differentiate between the different diseases that cause dementia. Humour could be a particularly sensitive way of detecting dementia because it puts demands on so many different aspects of brain function, such as puzzle solving, emotion and social awareness.”

“While memory loss is often the first thing that springs to mind when we hear the word dementia, this study highlights the importance of looking at the myriad different symptoms that impact on daily life and relationships. A deeper understanding of the full range of dementia symptoms will increase our ability to make a timely and accurate diagnosis. We need to see larger studies, following people for extended periods of time, to understand how and when changes in humour could act as a red flag for underlying brain changes. Dementia diagnosis poses multiple challenges, but through research we will be able to improve diagnosis and ultimately find treatments that tackle the specific causes of the condition. Anyone who is concerned about changes in their behaviour should speak to their GP.”

Lee Pearse, from Sheffield, a Champion of Alzheimer’s Research UK, lost his much loved mum Valerie to frontotemporal dementia in March, she was just 67. He said:

“We first noticed changes in Mum’s behaviour when she was 55 but it took four years before she received the correct diagnosis of frontotemporal dementia. She’d always been very loving and family focused but became increasingly uninvolved and emotionless. As she had a history of depression, we put it down to that and her doctor agreed.

“Mum’s behaviour became more and more erratic and we began to question the diagnosis. She’d forget family birthdays, laugh if someone had an accident or heard someone was unwell and was even sacked from her job – all completely out of character. I still feel distraught about what happened to Mum but proud to be supporting Alzheimer’s Research UK in its efforts to fund research to improve diagnosis and find the dementia treatments so urgently needed.”

“As we come to understand more about the symptoms of dementia we realise that the complex condition is about much more than memory loss. Such insights will allow us to build up a full picture of the changes that people experience in the early stages of dementia and as the condition progresses, guiding both improved and earlier diagnosis and the delivery of care. Recognising the behavioural patterns the condition follows will also help researchers discern different forms of the condition and identify suitable people for clinical trials to test new interventions.”

For further information, or to speak with, please contact Emma O’Brien, Science Communications Officer at Alzheimer’s Research UK on 0300 111 5 666, 07741 310 488 or email press@alzheimersresearchuk.org

Notes to editors:
• Ref: Altered sense of humor in dementia by C Clark et al. was published in the Journal of Alzheimer’s Disease on 10 November 2015
• Alzheimer’s Research UK is the UK’s leading charity specialising in finding preventions, treatments and a cure for dementia.
• We rely on donations to fund our vital dementia research. To help us defeat dementia, donate today by visiting www.alzheimersresearchuk.org or calling 0300 111 5555.
• We are currently supporting dementia research projects worth over £26 million in leading Universities across the UK.
• Our Defeat Dementia campaign, a pledge to raise £100 million in five years to grow the research field and accelerate progress towards new treatments and preventions, was announced by the Prime Minister at the G8 legacy event on 19 June 2014. For more information visit www.dementiablog.org/defeat-dementia