Common Viruses May Be Triggering the Onset of Alzheimer’s Disease 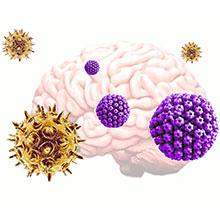 Medford, USA – Alzheimer’s disease can begin almost imperceptibly, often masquerading in the early months or years as forgetfulness that is common in older age. What causes the disease remains largely a mystery. But researchers at Tufts University and the University of Oxford, using a three-dimensional human tissue culture model mimicking the brain, have shown that varicella zoster virus (VZV), which commonly causes chickenpox and shingles, may activate herpes simplex (HSV), another common virus, to set in motion the early stages of Alzheimer’s disease. Normally HSV-1 – one of the main variants of the virus - lies dormant within the neurons of the brain, but when it is activated it leads to accumulation of tau and amyloid beta proteins, and loss of neuronal function – signature features found in patients with Alzheimer’s. The study is published in the Journal of Alzheimer’s Disease.

“Our results suggest one pathway to Alzheimer’s disease, caused by a VZV infection which creates inflammatory triggers that awaken HSV in the brain,” said Dana Cairns, GBS12, a research associate in the Biomedical Engineering Department. “While we demonstrated a link between VZV and HSV-1 activation, it’s possible that other inflammatory events in the brain could also awaken HSV-1 and lead to Alzheimer’s disease.”

Viruses Lying in Wait
“We have been working off a lot of established evidence that HSV has been linked to increased risk of Alzheimer’s disease in patients,” said David Kaplan, Stern Family Professor of Engineering and chair of the Department of Biomedical Engineering at Tufts’ School of Engineering. One of the first to hypothesize a connection between herpes virus and Alzheimer’s disease is Ruth Itzhaki of the University of Oxford, who collaborated with the Kaplan lab on this study.

“We know there is a correlation between HSV-1 and Alzheimer’s disease, and some suggested involvement of VZV, but what we didn’t know is the sequence of events that the viruses create to set the disease in motion,” he said. “We think we now have evidence of those events.”

According to the World Health Organization, an estimated 3.7 billion people under the age of 50 have been infected with HSV-1 – the virus that causes oral herpes. In most cases it is asymptomatic, lying dormant within nerve cells.

When activated, it can cause inflammation in nerves and skin, causing painful open sores and blisters. Most carriers – and that’s one in two Americans according to the CDC – will have between very mild to no symptoms before the virus becomes dormant.

Varicella zoster virus is also extremely common, with about 95 percent of people having been infected before the age of 20. Many of those cases are expressed as chicken pox. VZV, which is a form of herpes virus, can also remain in the body, finding its way to nerve cells before then becoming dormant.

Later in life, VZV can be reactivated to cause shingles, a disease characterized by blisters and nodules in the skin that form in a band-like pattern and can be very painful, lasting for weeks or even months. One in three people will eventually develop a case of shingles in their lifetime.

The link between HSV-1 and Alzheimer’s disease only occurs when HSV-1 has been reactivated to cause sores, blisters, and other painful inflammatory conditions.

How Sleeping Viruses May Wake
To better understand the cause-and-effect relationship between the viruses and Alzheimer’s disease, the Tufts researchers re-created brain-like environments in small 6 millimeter-wide donut-shaped sponges made of silk protein and collagen.

They populated the sponges with neural stem cells that grow and become functional neurons capable of passing signals to each other in a network, just as they do in the brain.

Some of the stem cells also form glial cells, which are typically found in the brain and help keep the neurons alive and functioning.

The researchers found that neurons grown in the brain tissue can be infected with VZV, but that alone did not lead to the formation of the signature Alzheimer’s proteins tau and beta-amyloid – the components of the tangled mess of fibers and plaques that form in Alzheimer’s patients’ brains – and that the neurons continued to function normally. However, if the neurons already harbored quiescent HSV-1, the exposure to VZV led to a reactivation of HSV, and a dramatic increase in tau and beta-amyloid proteins, and the neuronal signals begin to slow down.

“It’s a one-two punch of two viruses that are very common and usually harmless, but the lab studies suggest that if a new exposure to VZV wakes up dormant HSV-1, they could cause trouble,” said Cairns.

“It’s still possible that other infections and other pathways of cause and effect could lead to Alzheimer’s disease, and risk factors such as head trauma, obesity, or alcohol consumption suggest they may intersect at the re-emergence of HSV in the brain,” she added.

The researchers observed that the VZV infected samples started to produce a higher level of cytokines – proteins which are often involved in triggering an inflammatory response. Kaplan noted that VZV is known in many clinical cases to cause inflammation in the brain, which could possibly lead to activation of dormant HSV and increased inflammation.

Repeat cycles of HSV-1 activation can lead to more inflammation in the brain, production of plaques, and accumulation of neuronal and cognitive damage.

A vaccine for VZV – to prevent chickenpox and shingles—has also been shown to considerably reduce the risk of dementia. It’s possible that the vaccine is helping to stop the cycle of viral reactivation, inflammation, and neuronal damage.

The researchers also noted the long-term neurological effects that some COVID patients have experienced from the SARS-CoV-2 virus, particularly among the elderly, and that both VZV and HSV-1 can be reactivated after a COVID infection. Keeping an eye on possible follow-on cognitive effects and neurodegeneration would be advisable in these cases, they said.