Could this be the solution for Alzheimer’s Disease? =[L+MZ+Z+DHA+EPA] 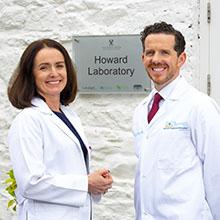 Waterford, Ireland – Ground-breaking new research has identified a unique combination of nutrients to slow the progression of Alzheimer’s Disease (AD), which affects over 520,000 people in the UK and represents a burden on the struggling NHS of over £26 billion per year.

The 18-month study1, published in the June edition of the respected Journal of Alzheimer’s Disease (JAD), examined the effect of nutritional compounds - found in common foods such as trout, broccoli, and peppers on people with the condition, and unveiled a ‘statistically significant’ find.

Conducted by experts at the Nutrition Research Centre Ireland2 in collaboration with University Hospital Waterford (UHW), it initially set out to examine the biochemical response of AD patients to two different combinations of nutritional supplements. The first formula contained the macular carotenoids Lutein, Meso-Zeaxanthin and Zeaxanthin, and the second combined the macular carotenoids plus a specifically designed fish oil3.

However, the researchers unexpectedly made a crucial discovery. They identified that patients receiving the formula containing fish oil maintained cognitive abilities and quality of life – far beyond those taking macular carotenoids alone.

Based on carer reports, overwhelmingly trial participants were identified to have positive outcomes, including functional benefits in memory, sight and mood. Dr Howard, who is founder and Chair of the Howard Foundation, said: “Alzheimer’s Disease is the largest public health crisis the UK has ever faced, and drug companies have so far fallen at every hurdle in finding a solution. This study gives us that breakthrough, in a unique natural compound of nutrients.”

Professor John Nolan, founder of the NRCI, who led the study, explains: “Our previous work confirmed that carotenoids are found in the eye and that enrichment of these essential nutrients with nutritional supplements can improve visual function. However, their high concentration in the healthy human brain also suggests a role for these nutrients in cognition.

“We know from several large population-based studies that nutrition is a key factor in the development of Alzheimer’s Disease, but attempts to identify an exact combination of nutrients that can positively impact on brain health have failed - until now.

“This work identifies a unique way to enhance the localised nutrients of the brain. Given our growing and ageing population and, importantly, that we live in a time where the nutritional value of foods continues to decline, I believe this is a valuable discovery that will challenge perceptions worldwide about the role of nutrition on brain function.”

Professor Riona Mulcahy from University Hospital Waterford was the medical consultant to the research. She added: “Up-to-date best medical advice suggests that you can lower your risk of AD through moderate alcohol intake, not smoking, being physically and mentally active, and eating a well-balanced diet.

This study shows that diet deficiency is key. Science is now helping us understand exactly what nutrients our brains need. It’s a very exciting development.”

Dr Howard added: “The crucial next question is how people with AD, or at risk of the condition, can obtain enough of these nutrients from a healthy, balanced diet, to protect the brain. The answer is they can’t, due to the quantity necessary to effect such change and the decline in nutrient value of food before it even reaches our dinner plate. A supplement, which we know is safe, inexpensive and effective, could be life-changing for the millions affected by this disease. Due to the small scale of this initial trial, we’ve now funded a larger project to confirm these findings.”

Dr George Perry, Editor in Chief of the Journal of Alzheimer’s Disease added: “Nolan’s study of Alzheimer’s disease is the first controlled study of bioavailability and clinical benefit of combined antioxidant therapy and fish oil. This study highlights the power of their earlier studies of the eye to guide studies of the brain.”

Called re-Mind, the extended research tracking the impact of this new nutritional formula on 120 patients with mild to moderate AD, is currently underway.

A specially-designed product based on the unique formula is now available. Called Memory Health, the over-the-counter capsules can be ordered online at: www.memoryhealth.com.

In 2016, the School of Health Sciences at WIT announced the establishment of this centre which has 26 members. Bringing together established and respected researchers from several academic disciplines, the new centre of excellence is conducting ground-breaking research with a national and international impact.

Researchers at the NRCI study the importance of nutrition for a wide range of human health issues ranging from visual function, cancer and brain health and function.

The area of expertise and research related to nutrition for eye health and brain function is led by Prof John Nolan. Prof Nolan who now holds a Chair for Human Nutrition Research at WIT is a Fulbright Scholar and a previous European Research Council Scholar Recipient. He has spent 18 years studying the role of nutrition for vision and cognitive health and has secured over 7-million euro in research funding, publishing over 100 peer-reviewed scientific papers. For more information visit www.nrci.ie and www.profjohnnolan.com.

About The Howard Foundation
The Howard Foundation is an English Charitable Trust founded in 1982 (registered 285822). Since its inception the Foundation has focussed on commissioning clinical trials on human nutrition, principally in respect of obesity and macular carotenoids, the latter being primarily conducted by Waterford Institute of Technology. Results have been disseminated at scientific Conferences it has organised or supported. The Foundation has also provided substantial funds for new buildings and maintenance at Downing College, Cambridge since 1984. Further details can be found at www.howard-foundation.com.