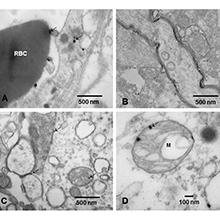 The detrimental impact of these tiny particles getting into the brain through the nasal and olfactory epithelium, the lungs and the gastrointestinal system is quickly recognized by extensive alterations in critical neuronal organelles including mitochondria, as well as axons and dendrites. Since these nanoparticles are in close contact with neurofilaments, glial fibers and chromatin, the researchers are very concerned about their potential for altering microtubule dynamics, accumulation and aggregation of unfolded proteins, mitochondrial dysfunction, altered calcium homeostasis and insulin signaling, and epigenetic changes.

“In the context of serious continuous exposures to high concentrations of fine particulate matter (PM 2.5) and ozone, our current electron microscopy findings and the extensive literature associating air pollutants with brain damage, the issue of who is at risk of neurodegeneration at an early age should be an urgent public health concern,” said Dr. Lilian Calderon-Garcidueňas. “The effects of poverty, urban violence and urban stress on impaired cognitive skills are also very important for the developing brain and can’t be ignored. We know gender, BMI, and APOE influence children's cognitive responses to air pollution.”

According to the researchers, the problem of having combustion-derived nanoparticles in children’s brains – developing brains – is very serious. These particles are ubiquitous and present in high concentrations in children as young as 3 years old. The particles contain transition neurotoxic metals and they are certainly causing extensive brain damage in key organelles. “The predominant combustion particles in young brains have properties that enable them to cause oxidative damage because these nanoparticles are capable of crossing all barriers. No barrier is spared,” Dr. Calderón-Garcidueňas emphasized.

Angélica González-Maciel added, “People with children and teens struggling in school and facing a significant increase of violence in school, streets, parks, and public transportation are deeply concerned about the impact these particles have on children’s behavioral patterns and academic performance and parents question what they can do to protect their families”.

All involved researchers agreed that in spite of the driving restrictions policies [that are clearly ineffective (Davis LW. Sci Rep 7: 41652, 2017)], millions of Mexico City residents continue to be exposed to very unhealthy concentrations of both PM 2.5 and ozone, both known risk factors for AD.

Efforts should also be aimed to identify and neuroprotect high risk young populations. Unfortunately, to date that is not happening.