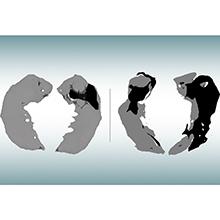 St. Louis, MO, USA – Alzheimer’s disease usually is diagnosed based on symptoms, such as when a person shows signs of memory loss and difficulty thinking. Up until now, MRI brain scans haven’t proven useful for early diagnosis in clinical practice. Such scans can reveal signs of brain shrinkage due to Alzheimer’s, but the signs only become unmistakable late in the course of the disease, long after the brain is significantly damaged and most people have been diagnosed via other means. But new research from Washington University School of Medicine in St. Louis shows that a mathematical analysis of data obtained with a novel MRI approach can identify brain cell damage in people at early stages of Alzheimer’s, before tissue shrinkage is visible on traditional MRI scans and before cognitive symptoms arise.

“This could be a new way to use MRI to diagnose people with Alzheimer’s before they develop symptoms,” said senior author Dmitriy Yablonskiy, PhD, a professor of radiology at the university’s Mallinckrodt Institute of Radiology. “The technique takes only six minutes to acquire data and can be implemented on MRI scanners that are already used worldwide for patient diagnostics and clinical trials.”

Published in the Journal of Alzheimer’s Disease, the study relies on a new quantitative Gradient Echo (qGRE) MRI technique developed in the Yablonskiy lab to show brain areas that are no longer functioning due to a loss of healthy neurons.

“Using this technique in patients with Alzheimer’s disease, we discovered brain areas that look normal on traditional MRI but look dark on qGRE images, which we attribute to significant neurodegeneration,” said Satya V. V. N. Kothapalli, PhD, a staff scientist in radiology and the first author of the study. “We call them ‘dark matter.’”

While traditional MRI is capable of showing where damaged areas of the brain have decreased in volume, the qGRE technique goes a step further, detecting the loss of neurons that precedes brain shrinkage and cognitive decline. Alzheimer’s disease develops slowly over the course of two decades or more before symptoms arise. First the brain protein amyloid beta accumulates into plaques in the brain, then another brain protein – tau – coalesces into tangles and neurons begin to die. Finally, tissue atrophy becomes visible on MRI brain scans, and cognitive symptoms arise. People at early stages of the disease can be identified via amyloid-PET brain scans or by testing for amyloid in the blood or the cerebrospinal fluid that surrounds the brain and spinal cord, but such tests do not provide information on neuronal damage.

The study involved 70 people ages 60 to 90 who were recruited through the Charles F. and Joanne Knight Alzheimer Disease Research Center (Knight ADRC). Participants completed extensive clinical and cognitive testing to assess their level of cognitive impairment. The participant group included people with no cognitive impairment as well as those with very mild, mild or moderate impairments.

Each participant underwent either a PET brain scan or a spinal tap to gauge the amount of amyloid plaques in his or her brain. They also underwent MRI brain scans. Researchers applied the qGRE MRI technique to scan the hippocampus, the brain’s memory center and one of the earliest affected brain regions in Alzheimer’s. Results showed the hippocampus often contained a viable tissue section with relatively preserved neurons and a dark matter dead zone virtually devoid of healthy neurons.

These dark matter areas were present in people who tested positive for amyloid but were not yet experiencing symptoms, and they grew larger as the disease progressed. Compared with traditional MRI measures of brain atrophy, biomarkers for dark matter correlated much better with individual cognitive scores for very mild to moderate dementia.

The study builds on and corroborates findings from Alzheimer’s research that took place at Washington University more than two decades ago when Alzheimer’s was formally diagnosed only through autopsy. In 2001, John C. Morris, MD, the Harvey A. and Dorismae Hacker Friedman Distinguished Professor of Neurology and director of the Knight ADRC, led a study that examined the brain tissue of deceased Alzheimer’s patients and found that damaged brain regions had begun to lose healthy neurons well before the disease caused a significant loss of brain volume in these areas.

Then, in the early 2000s, Tammie L. S. Benzinger, MD, PhD, a professor of radiology and of neurosurgery, and the Knight ADRC’s director of imaging studies, was among the pioneers at Mallinckrodt Institute of Radiology to use PET brain scans targeted against amyloid beta as a tool for detecting Alzheimer’s.

In the current study, also co-authored by Morris and Benzinger, researchers documented the same relationship between neuronal loss and Alzheimer’s symptoms using the non-invasive qGRE MRI technique in living patients. Working with co-author Richard Perrin, MD, PhD, an associate professor of pathology & immunology, the research team also confirmed this relationship under the microscope by examining brain tissues that were donated after the death of a study participant. The postmortem examination showed that the neuronal loss in the hippocampus actually exceeds loss of tissue volume and that these changes are well reflected in MRI measures of dark matter.

Yablonskiy and colleagues are among the many researchers now pursuing a low-cost, easily accessible test for Alzheimer’s as an alternative to the expensive PET brain scans and invasive spinal taps now used in research settings to assess the presence and progression of the disease. Such a test, especially one that can identify people at very early stages of disease, would provide a huge boost to Alzheimer’s research, drastically slashing the cost and the time necessary to screen patients for clinical trials, thus spurring the development of new treatments.

While Alzheimer’s researchers continue to pursue drug treatments for the disease, most agree that successful treatment will hinge on early detection and on finding ways to head off brain damage before later stages of Alzheimer’s. While PET scans and spinal taps continue to play important roles in Alzheimer’s research, both have limitations that prevent their widespread use as a screening tool for early signs of the disease. PET brain scans are still the gold standard for detecting signs of Alzheimer’s, but the machines are expensive and seldom available for routine patient diagnosis, much less widespread clinical screening. PET scans also require the injection of a radioactive tracer for brain imaging.

As Alzheimer’s progresses, it can be detected by testing for tau proteins in cerebrospinal fluid, but sampling requires a spinal tap that may be too invasive for use as a general screening tool, especially for people who have no symptoms.

Another promising option for Alzheimer’s screening – also under development at Washington University – is a non-invasive, relatively inexpensive blood test that has proven to be highly accurate in detecting early signs of Alzheimer’s disease. A commercial version of the blood test recently became available to doctors in the United States and Europe, but it is not yet covered by health insurance. While each testing approach has its own strengths and weaknesses, the qGRE MRI technique may be poised for early adoption since it is based on MRI technology that is widely available worldwide, is noninvasive and can be carried out without the use of radioactive tracers.

“Our qGRE test offers great potential as an early diagnostic tool for the preclinical stage of Alzheimer’s disease, thus providing a large window for therapeutic intervention,” Yablonskiy said. “It also has great potential as a noninvasive MRI technique available in a conventional clinical setting for the widespread screening that is necessary to get people with early Alzheimer’s into clinical drug trials.”

Image caption: An MRI scan of the hippocampus, the brain’s memory center, in an older person with no signs of cognitive decline (left) and a person of similar age with mild Alzheimer’s (right) has been analyzed with a new technique that shows where healthy brain cells have been lost (dark areas). New research from Washington University School of Medicine in St. Louis shows that this novel MRI approach can identify brain cell damage in people at early stages of Alzheimer’s, before tissue shrinkage is visible on traditional MRI scans (credit: Satya Kothapalli/Washington University)

About the Journal of Azlheimer's Disease
Now in its 24th year of publication, the Journal of Alzheimer’s Disease (JAD) is an international multidisciplinary journal to facilitate progress in understanding the etiology, pathogenesis, epidemiology, genetics, behavior, treatment, and psychology of Alzheimer’s disease. The journal publishes research reports, reviews, short communications, book reviews, and letters-to-the-editor. Groundbreaking research that has appeared in the journal includes novel therapeutic targets, mechanisms of disease, and clinical trial outcomes. JAD has a Journal Impact Factor of 3.909 according to Journal Citation Reports (Clarivate, 2020). The journal is published by IOS Press. j-alz.com