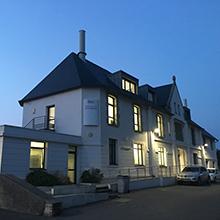 Roscoff, France - A new study led by Laurent Meijer of ManRos Therapeutics shows that some pyrazole insecticides, of which fipronil is an archetype, trigger enhanced in vitro production of Aβ42/Aβ43 over Aβ40 amyloid peptides in a cell-free, highly purified preparation of γ-secretase, in various cell lines and in neurons differentiated from human-induced pluripotent stem cells (iPSCs) from a healthy or a familial Alzheimer's disease (AD) patient with the APP K724N mutation. Findings are published in the Journal of Alzheimer's Disease.

Immunoprecipitation/mass spectrometry analyses show enhanced production of A peptides cleaved at positions 42/43, and reduced production of peptides cleaved at positions 38 and lower, a characteristic of AD. Pyrazoles also shift the cleavage pattern of alcadeinα, another γ-secretase substrate, suggesting a direct effect of these insecticides on γ-secretase activity. Fipronil is metabolized to fipronil sulfone, a very stable metabolite and potent Aβ42/Aβ43 inducer, which accumulates in adipose tissue and brain, suggesting that long-term exposure in animals could lead to Aβ42/Aβ43 production in vivo.

"We have added some pyrazole insecticides, especially the main metabolite of fipronil, in the growing list of HCE products which are able to alter the specificity of Aβ production," commented Laurent Meijer, PhD, Chairman and Chief Scientific Officer of ManRos Therapeutics, Roscoff, France. "On a long-term, cumulative and additive basis, these compounds may alter the Aβ production pattern sufficiently to lead to AD pathogenesis, suggesting the possible existence of environmental 'Alzheimerogens' (named by analogy with carcinogens), which may contribute to the initiation and propagation of the amyloidogenic process in sporadic AD. The main metabolite of fipronil, a 'persistent organic product (POP)' widely used in agriculture, urban pest control and veterinary applications, stably accumulates in adipose tissue and is able to cross the blood brain barrier, therefore qualifying as a potential Alzheimerogen."

Identifying compounds able to induce Aβ42/Aβ43 production may provide keys to understand some of the initiating causes of sporadic AD. Furthermore, some of these products might be turned into pharmacological tools to develop non-recombinant, chemically-induced AD animal models.