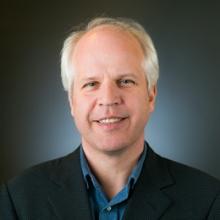 “I would like to thank all of the dedicated scientists who contributed to the success of this investigation and the editors of the Journal of Alzheimer’s Disease, who selected our paper among the hundreds published by the journal in 2014,” stated Dr. Kolb.

Each year the more than 500 Associate Editors of the Journal of Alzheimer’s Disease (JAD) vote to select an outstanding article published the previous year to receive this prestigious award, which is made possible by support from IOS Press, publisher of JAD. The winning paper is entitled “Early Clinical PET Imaging Results with the Novel PHF-Tau Radioligand [F18]-T808” (J Alzheimers Dis 38, 171-184, 2014), by D. Chien et al., which has been made freely available to readers.

The importance of the article
Hyperphosphorylated tau protein is the main component of NFTs and neuropil threads, which are pathological hallmarks of AD and other neurodegenerative diseases. NFT spread increases with disease progression and the density correlates with dementia severity. Up until recently, most human studies related to NFTs were performed with postmortem tissue. Kolb and co-investigators have developed positron emission tomography (PET) imaging tracers [18F]-T807 and [18F]-T808, which show promise for the in vivo evaluation of NFT pathology.

The clinical study (J Alzheimers Dis 38, 171-184, 2014) showed that healthy subjects displayed little tracer retention in the cortical gray matter, while two AD subjects showed a distinct pattern of radiotracer retention, consistent with the expected NFT deposit pattern described by Braak et al. Interestingly, one subject with severe AD had a higher [18F]-T808 retention in the occipital lobe than all the other subjects. Clinically, this subject had vision loss without eye structural abnormalities, suggesting a central nervous system process. Thus, tau PET imaging holds great promise for the in vivo determination of the severity of the disease and for monitoring disease progression.

Alzheimer Award Recipient Hartmuth Kolb, PhD
Dr. Hartmuth Kolb received his PhD in Organic Chemistry in 1991 at Imperial College of Science, Technology and Medicine, London, UK. Following postdoctoral work with K. Barry Sharpless (2001 Chemistry Nobel Laureate), he joined Ciba-Geigy in 1993. In 1997, Dr. Kolb became the Head of Chemistry at Coelacanth Corporation. In this role, he and Dr. Sharpless developed the Click Chemistry approach to drug discovery. In 2002, he joined The Scripps Research Institute as an Associate Professor, focusing on in situ Click Chemistry. From 2004 to 2013, he was the head of the Siemens Biomarker Research group, where he and his team developed novel oncology and neurodegenerative disease PET tracers, key highlights being the PHF-Tau tracer, [18F]-T807 and [18F]-T808. Dr. Kolb joined Johnson & Johnson in January 2014 as the Head of Neuroscience Biomarkers. He is an author on over 75 peer-reviewed publications and review articles.

“We are delighted that through this award we are able to recognize work that is providing the foundation for revolutionizing the diagnosis and treatment of Alzheimer disease,” commented George Perry, PhD, Editor-in-Chief, Journal of Alzheimer's Disease, and Dean of the College of Arts and Sciences and Professor of Biology at the University of Texas at San Antonio.

Dr. Perry will present Dr. Kolb with the Alzheimer Award, which comprises a bronze Alzheimer Medal featuring the likeness of Alois Alzheimer, a certificate, and a $7,500 cash award, at the Alzheimer’s Association International Conference (AAIC), July 18-23 in Washington, DC.

ABOUT THE JOURNAL OF ALZHEIMER’S DISEASE (JAD)
The Journal of Alzheimer's Disease (http://www.j-alz.com) is an international multidisciplinary journal to facilitate progress in understanding the etiology, pathogenesis, epidemiology, genetics, behavior, treatment, and psychology of Alzheimer's disease. The journal publishes research reports, reviews, short communications, book reviews, and letters-to-the-editor. Groundbreaking research that has appeared in the journal includes novel therapeutic targets, mechanisms of disease, and clinical trial outcomes. The Journal of Alzheimer's Disease has an Impact Factor of 4.151 according to Thomson Reuters' 2015 Journal Citation Reports®. JAD is published by IOS Press (www.iospress.com).