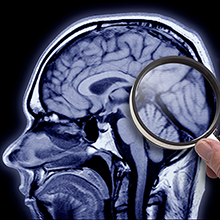 Birmingham, AL, USA – With increased age comes the increased risk to develop cancer or dementia. Both conditions share similar risk factors such as hypertension and diabetes. Many cancer patients experience cognitive impairment from cancer and its treatments with symptoms similar to dementia. But are these only similarities, or does a cancer diagnosis predispose patients to developing dementia? Prior literature indicates a lower risk of dementia after a cancer diagnosis and vice versa. However, studies of the long-term effects are lacking.

As part of her dissertation at the University of Alabama at Birmingham School of Public Health, Mackenzie Fowler, PhD, conducted a retrospective study to evaluate the long-term relationship between the two conditions. Results published in the Journal of Alzheimer’s Disease showed dementia patients with cancer history demonstrated better cognition at dementia diagnosis and declined slower than dementia patients without cancer history.

“Our findings indicate that, even in the long run, only around 20 percent of cancer patients develop dementia after their cancer diagnosis, and those who do seem to experience better cognition at diagnosis and over time than those without a prior cancer diagnosis,” said Dr. Fowler, now a postdoctoral scholar trainee in the UAB Division of Hematology and Oncology in the Marnix E. Heersink School of Medicine. “This inverse relationship between cancer and dementia confirms similar results in the medical literature while also providing long-term evidence.”

Fowler used data going back to 2003 from UAB to identify dementia patients with and without prior cancer diagnoses. She then evaluated recorded cognitive scores of the patients over five years from 2014-2020. Having a clinical patient population also allowed for observation of diversity within the population over an extended period. Rates of cognitive decline between race and ethnicity groups differed. Regardless of cancer status, underrepresented race and ethnicity groups did not perform as well as non-Hispanic white patients.

“The next step is to ask why there is this overall inverse relationship and why two or more cancers seems to alter this relationship,” Dr. Fowler said. “Could it be because early signs of cognitive decline were captured earlier due to a cancer patient’s receiving frequent medical attention? Is it something that is more biologically driven? What about race, socioeconomic status or other social determinants of health? There are many questions to be answered by future studies.”

Dr. Fowler notes major study limitations include not being able to differentiate by cancer or dementia type and stages and that all study participants were from one hospital. She hopes to add these variables into future studies with larger, more geographically diverse samples.

Contact
Further information can be obtained from media contact Hannah Echols at the University of Alabama at Birmingham (+1 205-704-2939 or echolsh@uab.edu).

About UAB
Known for its innovative and interdisciplinary approach to education at both the graduate and undergraduate levels, the University of Alabama at Birmingham, a part of the University of Alabama System, is an internationally renowned research university and academic medical center with over $600 million in research awards annually, as well as Alabama’s largest single employer, with some 26,000 employees, and has an annual economic impact exceeding $7.15 billion on the state. The pillars of UAB’s mission include education, research, innovation and economic development, community engagement, and patient care. uab.edu

About the Journal of Alzheimer's Disease
Now in its 25th year of publication, the Journal of Alzheimer's Disease (JAD) is an international multidisciplinary journal to facilitate progress in understanding the etiology, pathogenesis, epidemiology, genetics, behavior, treatment, and psychology of Alzheimer's disease. The journal publishes research reports, reviews, short communications, book reviews, and letters-to-the-editor. Groundbreaking research that has appeared in the journal includes novel therapeutic targets, mechanisms of disease, and clinical trial outcomes. JAD has a Journal Impact Factor of 4.106 according to Journal Citation Reports (Clarivate, 2022). j-alz.com