During the recent International Conference on Alzheimer's Disease and Related Disorders (ICAD), IOS Press was honored to present Queen Sofia of Spain with a commemorative edition of Alzheimer's Disease: A Century of Scientific and Clinical Research. This landmark work commemorates the centennial of Alois Alzheimer's discovery of what would be known as Alzheimer's disease (AD). Each conference participant received a copy of the book with the compliments of GlaxoSmithKline. 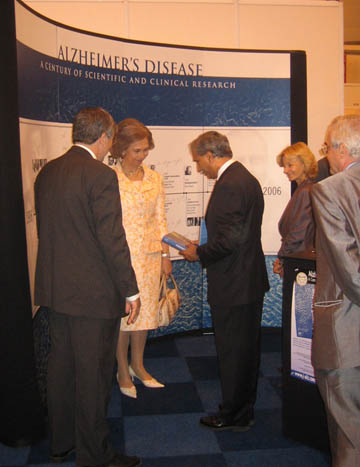 Through her Queen Sofia Foundation, the Alzheimer's Project, a care and research facility being built in Madrid, will provide inpatient, outpatient, and family services for families that have to deal with Alzheimer's Disease The book traces how the true importance of AD as the major cause of late life dementia ultimately came to light and narrates the evolution of the concepts related to AD throughout the years and its recognition as a major public health problem, with an estimated 30-40 million people affected by AD today. This milestone work has been guided by four of the most prominent voices in the field today, George Perry, Dean of the University of Texas at San Antonio College of Sciences and Professor of Pathology and Neurosciences, Case Western Reserve University, Editor-in-Chief, Journal of Alzheimer's Disease; Jesús Avila, Center for Molecular Biology, University Autónoma of Madrid, Senior Editor, Journal of Alzheimer's Disease; June Kinoshita, Executive Editor, Alzheimer Research Forum; and Mark A. Smith, Department of Pathology, Case Western Reserve University, Co-Editor-in-Chief, Journal of Alzheimer's Disease.

George Perry commented, "The book brings to life, and in many instances revisits and reflects on, the classic studies that have essentially defined Alzheimer's disease research. My co-editors and I are extremely pleased that this project has attracted participation from nearly every single player in the field and, having read each contribution and now received feedback from readers, I am convinced that the book is destined to become one of the defining works in the field."

According to Dr. Perry, "These writings bring to the practitioner, student and interested lay person a perspective not only on the past, but also on where the Alzheimer's disease field is likely to go in the future. Only time will tell whether these milestones have charted the future accurately, but they are unquestionably the foundation upon which the future will be built."

Contact a.engelen@iospress.nl or market@iospress.nl for additional information or to schedule an interview. Visit http://www.j-alz.com/book2 to view the table of contents including abstracts of each article.