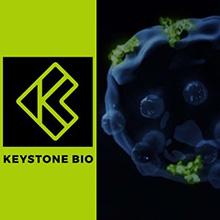 St. Louis, MO, USA – Keystone Bio, a biotechnology company, is a frontrunner in developing precision biologics to eliminate Porphyromonas gingivalis (Pg) and is releasing groundbreaking data that shows bacterial toxic proteins from Pg in the mouth are released into the blood and cross the blood-brain barrier (BBB) as the major driver of sporadic Alzheimer’s disease (AD) and chronic inflammation. This new data supports a “peripheral” model of Pg blood-transported toxic proteins delivered into the blood and brain versus the earlier literature in which human and animal model studies support the “local” gingipains AD brain model. What this means for AD patients and those at early risk is that Keystone Bio is developing a specific diagnostic and treatment to eliminate Pg and the flow of these toxic proteins to the brain.

This data can now be integrated into a more unifying "concept" and explanation for the "infection hypothesis" for AD and other dementia-related disease(s). A larger HagA domain virulence factor is found in many AD and some age-matched control brain tissues. Its complex role in local and systemic inflammatory diseases is well understood and further demonstrates systemic blood borne delivery for the bacterial source of "gingipains" in the brain.

This groundbreaking data has been published in the Journal of Alzheimer's Disease and presented in three posters this week at AAIC 2021:

Keystone Bio further elaborates on this groundbreaking data in the hypothesis paper published in JAD.

About Keystone Bio
Keystone Bio (KB) is a clinical stage, biopharmaceutical company with novel disease-modifying, precision, anti-bacterial bio-therapeutics to target an important and largely unaddressed bacterial driver of systemic inflammation that significantly contribute to multiple inflammatory diseases such as heart disease and dementia/Alzheimer’s disease along with companion diagnostics to diagnose/identify people at risk and monitor treatment. Using KB proprietary methods, KB has identified a bacterial toxic protein that is a primary driver of systemic inflammation. This bacterial toxic protein complex is secreted actively in large amounts by the bacteria for its own survival, however has off site systemic pathology in various end organs such as the brain in AD brain tissues. This virulent protein complex is packaged into distinct outer membrane vesicles, breaking down and crossing the BBB, and impacts the brain parenchyma in specific neuro-anatomic locations consistent with AD development. Those same toxic proteins are delivered throughout the body from their source, spreading systemic inflammation up to and including end organ disease. KB has the only Precision Biologic on the planet that’s been shown to eliminate them at their source and is developing the only diagnostic that identifies it in blood. KB is advancing a clinically validated bio-therapeutic treatment (KB-001 Mab) for the elimination of Porphyromonas gingivalis and all of its virulence factors including the outer membrane vesicles and their toxic protein complex.

Keystone Bio’s CEO and co-founder Daniel Sindelar, DMD, has played the key role globally in establishing oral pathogens causality of systemic disease including Alzheimer’s for the last 10 years. Dr. Sindelar is the first dental professional to receive a Preceptorship for Heart Attack and Stroke Prevention, is the founder and director of Oral Genomics, LLC, and Editor-in-Chief of the OSH News Network. Peter Nara is CSO of Keystone Bio and is a highly sought-after consultant in the biotechnology community with special scientific interests in novel mechanisms of virulence, pathogenesis, and host adaptation to infectious diseases and cancer, and development of innovative approaches to diagnostic tests, vaccines, and treatment. Dr. Nara has served on many scientific advisory committees and task forces, is an author on more than 125 scientific publications and reviews, and is co-founder, president, and CEO of the Board of Biological Mimetics (BMI) for almost 20 years. keystonebio.com

About the Journal of Alzheimer's Disease
Now in its 24th year of publication, the Journal of Alzheimer’s Disease (JAD) is an international multidisciplinary journal to facilitate progress in understanding the etiology, pathogenesis, epidemiology, genetics, behavior, treatment, and psychology of Alzheimer’s disease. The journal publishes research reports, reviews, short communications, book reviews, and letters-to-the-editor. Groundbreaking research that has appeared in the journal includes novel therapeutic targets, mechanisms of disease, and clinical trial outcomes. JAD has a Journal Impact Factor of 4.472 according to Journal Citation Reports (Clarivate, 2021). The journal is published by IOS Press. j-alz.com