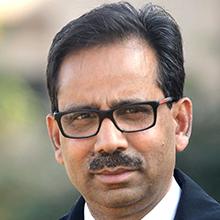 Gurgaon, India – In a breakthrough human study published in the Journal of Alzheimer's Disease, anti-oxidant glutathione (GSH), which protects the brain from stress, has been found to be significantly depleted in Alzheimer's patients compared to normal subjects.

As GSH is a very important anti-oxidant that protects the brain from free radicals, the findings give us another measure to use when diagnosing potential for the advancement of Alzheimer’s disease (AD) or recognizing those that are in the throes of Alzheimer’s advancement.

By implementing non-invasive imaging techniques, Dr. Pravat Mandal (pictured) and his team of researchers found that GSH has two conformations (closed and extended forms) in the brain. It was discovered that when GSH is depleted in the hippocampus regions of an elderly person the healthy brain suffers mild cognitive impairment (MCI), which is known to be present in the earlier stages of AD.

It is now correlated that closed form of GSH is depleted in AD patients. At present no report is available to indicate to what extent the lower levels of extended form of GSH in those suffering from AD can be measured but it opens the possibility for further clinical observation using GSH as supplement to combat the advancement of AD.

“If routine non-invasive tests for lower levels of GSH in the hippocampus regions are performed, we might be able to mitigate the advancement of Alzheimer’s disease by providing GSH supplements – an observational study is planned,” Dr. Mandal said.

The multi-continent research team lead by Dr. Mandal, led this breakthrough research and this research has a huge potential for therapeutic development for AD.

This research was funded by Tata innovation Fellowship (to Dr. Mandal).