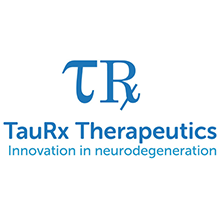 Aberdeen, UK and Singapore, Singapore – In a paper published in today’s online issue of the Journal of Alzheimer’s Disease, TauRx has reported unexpected results of a pharmacokinetic analysis of the relationship between treatment dose, blood levels and pharmacological activity of the drug hydromethylthionine on the brain in over 1,000 patients with mild-to-moderate Alzheimer’s disease. These results showed that, even at the lowest dose of hydromethylthionine previously tested in two Phase 3 global clinical trials (8 mg/day), the drug produced concentration-dependent effects on cognitive decline and brain atrophy.

Hydromethylthionine, taken as a tablet, is the WHO-approved non-proprietary name for the compound previously referred to by TauRx as LMTM. This drug blocks abnormal aggregation of tau protein in the brain [2,3], which is increasingly recognised as an important driver of clinical dementia [1]. In Phase 3 global clinical trials conducted in almost 1,700 patients with mild-to-moderate Alzheimer’s disease between 2012–2016, hydromethylthionine was tested at doses of 150–250 mg/day against a low dose of 8 mg/day, which was intended only as a control to mask the discolouration of urine that can sometimes occur with the drug. The study designs were based on the findings from an earlier trial that used a different variant of the drug [6]. Surprisingly, there was no difference between the high doses and the low dose of hydromethylthionine on any of the clinical outcomes in the trials [4,5].

To further explore these results, the researchers conducted a new pharmacokinetic population analysis using plasma concentration data from 1,162 of the patients who participated in either of the two completed Phase 3 hydromethylthionine trials to measure how blood levels of the drug relate to its effects on the brain. Using a new assay, the researchers found that the effects of hydromethylthionine at the 8 mg/day dose were determined by the blood level, and that the majority of patients had high enough blood levels of the drug at this dose to produce meaningful reductions in cognitive decline and brain atrophy. They concluded that a slightly higher dose of hydromethylthionine of 16 mg/day would ensure that all patients would have the blood levels needed to maximise the drug’s activity, since its effects plateau at higher concentrations and doses. The pharmacokinetic profile they found, typical of many drugs, now explains why the pharmacological effects of hydromethylthionine at the high doses tested in the trials were no better than those seen in patients with high blood levels at the 8 mg/day dose.

The analysis also showed that whilst hydromethylthionine has a similar concentration-response profile in patients taking the drug as an add-on therapy to the routinely used symptomatic treatments in Alzheimer’s disease, the maximum effect in these patients was reduced by half. This finding supports the hypothesis that symptomatic drugs for this condition interfere with the disease-modifying treatment effects of hydromethylthionine. This hypothesis was initially proposed on the basis of the drug’s Phase 3 trial results [4,5].

“Since we already have a substantial database supporting the safety and tolerability of hydromethylthionine in clinical trials of patients with mild-to-moderate Alzheimer’s disease, the additional results of this analysis have given us the confidence to expand the scope of the new TauRx Lucidity clinical trial to confirm the potential efficacy of the hydromethylthionine 16 mg/day dose in these types of patients,“ said Prof. Claude Wischik, of Aberdeen University and executive chairman of TauRx Therapeutics Ltd.

He noted that hydromethylthionine is taken in a convenient oral form at home and does not require patients to attend clinics for intravenous infusions or injections, unlike various other Alzheimer’s disease treatments currently being tested in clinical trials.

“In addition to the reduction in brain atrophy, we were surprised to see the large cognitive effects of treatment in the patient group with the higher blood levels of hydromethylthionine at the 8 mg daily dose,” he added. “According to scores from the ADAS-cog scale, the effect was around 7.5 points, or three times that seen from current routine Alzheimer’s treatments, and would be equivalent to an 85% reduction in cognitive decline over 65 weeks.” The Alzheimer’s Disease Assessment Scale–cognitive subscale (ADAS-Cog) is the standard cognitive scale used to measure neuropsychological changes in Alzheimer’s disease clinical trials. A 4-point change is generally considered as indicating a clinically meaningful difference1.

Professor George Perry, Editor-in-Chief of Journal of Alzheimer’s Disease, commented: “The extensive data, experience, and now pharmacokinetics, highlight the potential of hydromethylthionine treatment as an important new avenue forward in Alzheimer’s disease. The clinical benefit and reduction in brain atrophy greatly exceed those reported for other therapeutic routes.”

Professor Serge Gauthier, Director of the Alzheimer Disease Research Unit, McGill Center for Studies in Aging, commented: “The researchers are aiming to confirm what they have found so far in the placebo-controlled trial that is now ongoing. Hydromethylthionine is the best hope we have right now for a disease-modifying drug acting on the tau pathology associated with Alzheimer’s disease.”

About the Study
In the new study, pharmacokinetic analyses were conducted using blood concentration data from 1,162 of 1,686 patients who had participated in either of two previously completed Phase 3 trials that assessed the pharmacological activity of LMTM in mild-to-moderate AD [4,5]. The first of these trials (TRx-237-015) was a 15-month study, which recruited 890 patients from 115 sites across 16 countries in Europe, North America, Asia and Russia. Patients had to be < 90 years of age and have a diagnosis of mild-to-moderate probable AD, and a Mini-Mental State Examination (MMSE) score of 14–26 inclusive, and a Clinical Dementia Rating (CDR) total score of 1 or 2. The second study (TRx-237-005) was an 18-month trial that recruited 800 patients from 108 sites in Canada, the United States, Australia and Europe. Patients had to meet the same age and diagnosis criteria as the first trial, except that they were required to have a MMSE score of 20–26 inclusive and a CDR total score of 0.5 or 1.0. Concomitant use of acetylcholinesterase inhibitors or memantine (or both) was permitted in both studies. Patients were randomly assigned to receive LMTM at doses of 250, 150 or 8 mg/ day in Study 015 and doses of 200 or 8 mg/day in Study TRx-237-005. The validated lower limit of quantification of the pharmacokinetic assay was 0.20 ng/mL, corresponding to an estimated steady state peak plasma concentration of 0.37 ng/ml. About 35% of patients taking the 8 mg/day dose had plasma concentrations below this level.

About Hydromethylthionine (LMTM) and Protein Aggregation Inhibitors
TauRx’s tau aggregation inhibitors (TAIs) have arisen from nearly 30 years of research. TAIs work by preventing the tau aggregation process responsible for the “neurofibrillary tangles” that were originally discovered by Alzheimer and that cause dementia, thereby potentially slowing and even arresting memory loss [6]. Professor Wischik and colleagues originally discovered that tangles are composed of tau protein and that the process can be blocked by drugs [6]. The first-generation TAI, rember® was a patented, highly-purified version of methylthioninium chloride (methylene blue), a compound previously used to treat a variety of conditions. Hydromethylthionine is a stable reduced form of methylthioninium, which is better absorbed [7] than methylene blue and has been tested in clinical trials in mild-to-moderate Alzheimer’s disease.

About TauRx Therapeutics Ltd
TauRx Therapeutics Ltd is a member of the TauRx Pharmaceuticals group, which is developing technology spun-out from the University of Aberdeen, Scotland. The company was established in Singapore in 2002 with the aim of developing new treatments and diagnostics for a range of neurodegenerative diseases. The company’s tau aggregation inhibitor, hydromethylthionine, targets aggregates of abnormal fibres of tau protein that form inside nerve cells in the brain that give rise to ‘tau tangles’. TauRx’s headquarters are in Singapore and its primary research facilities are based in Aberdeen. taurx.com