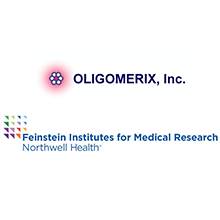 New York, USA – Oligomerix, Inc., a privately held company pioneering the development of tau oligomer inhibitors for Alzheimer’s disease (AD) and related neurodegenerative disorders, and the Feinstein Institutes for Medical Research announced today the publication of preclinical data demonstrating that an oral small molecule drug inhibits the formation of neurotoxic tau oligomers in an animal model of tau aggregation most relevant to AD. The study showed that the compound blocked tau self-association, which is the earliest step in the toxic tau aggregation cascade, and inhibited the downstream events that lead to tau fibril formation.

Tau aggregation and the aggregated protein’s evolution into neurofibrillary tangles in the brain of affected individuals is one of the hallmarks of AD. Abnormal tau pathology is also associated with several other neurodegenerative diseases.

In a paper published November 19, 2019 online in the Journal of Alzheimer’s Disease titled “In Vivo Validation of a Small Molecule Inhibitor of Tau Self-Association in htau Mice” researchers reported that the compound inhibited hippocampal self-associated tau in the htau mouse model of tauopathy which expresses the six CNS isoforms of the human tau protein. The drug also reduced the amount of insoluble tau aggregates and phosphorylated insoluble aggregates in a linear, dose-dependent fashion in relation to brain compound levels. Immunocytochemical analysis demonstrated that the compound decreased the accumulation of misfolded tau associated with tau aggregates.

The tau oligomer inhibitor was administered in feed at three different doses, and was well tolerated by the treated mice, with no adverse events or behavioral abnormalities observed.

“This study validates Oligomerix’s approach for inhibiting tau aggregation and shows that targeting tau oligomer formation at the beginning of the aggregation cascade can inhibit the entire downstream aggregation pathway,” commented James Moe, PhD, MBA, President and CEO of Oligomerix, and an author of the publication.

“There is an urgent need for new approaches to the treatment of Alzheimer’s disease, and this study describes promising results with a novel compound,” said Peter Davies, PhD, director of the Litwin-Zucker Center for Alzheimer’s Disease & Memory Disorders at the Feinstein Institutes and author on the paper. “A drug that could slow or prevent the development of Alzheimer’s disease pathology could be a huge step forward.”

Dr. Moe said, “Our next steps will include studies to assess whether this lead compound might be beneficial in an inherited form of tauopathy, and whether it can ameliorate behavioral defects.” The company is conducting preventive and therapeutic studies in the JNPL3 mouse model of tauopathy that expresses the human tau 4R0N isoform with the mutation P301L associated with frontotemporal dementia.

“We are also currently conducting IND-enabling studies for this compound, and plan to initiate human clinical trials in 2021,” added Dr. Moe.

AD is a growing public health crisis, with no effective treatments or cures. According to the World Health Organization, more than 150 million people globally could suffer from dementia by 2050. To date, the majority of clinical studies for AD have focused on targeting amyloid beta deposition in the brain, the other major pathological hallmark of AD.

Research has shown tau load and distribution directly correlate with disease progression in AD, and as a result, interest has begun to turn to tau as a potential therapeutic target. However, there are few programs in clinical development, and those that are currently in the clinic are focused on intervening after tau proteins have misfolded and oligomers have formed, in contrast to Oligomerix’s approach of targeting the first step in this process.

“Research best progresses through teamwork and collaboration,” said Kevin J. Tracey, MD, president and CEO of the Feinstein Institutes. “Drs. Davies and Moe and their research teams are providing crucial leadership by their efforts to combat Alzheimer’s disease.”

Oligomerix has developed a proprietary platform for drug discovery and biomarker development for central nervous system disorders which targets tau self-association. The platform has enabled Oligomerix to develop orally active, small molecule therapeutic candidates with good blood brain barrier penetration. In parallel, the company is developing a novel and translatable tau fragment-specific biomarker with potential to help guide clinical development by serving as a surrogate marker for tau oligomer levels in the brain.

About Oligomerix, Inc.
Oligomerix is an emerging biotechnology company focused on discovering and developing novel, small-molecule inhibitors of tau oligomer formation for Alzheimer’s disease (AD) and related neurodegenerative diseases with tau pathology. Oligomerix’s drug discovery platform has identified a pipeline of novel, small molecule lead compounds that are designed to inhibit tau oligomer formation at the beginning of the aggregation process, and the company has achieved proof-of-concept in an animal model best representing tau aggregation in AD. IND-enabling studies are in process for the company’s lead program targeting AD. The NYC-based company is located at the Ullmann Research Center for Health Sciences within the Albert Einstein College of Medicine. oligomerix.com

About the Feinstein Institutes
The Feinstein Institutes for Medical Research is the research arm of Northwell Health, the largest health care provider and private employer in New York. Home to 50 research labs, 2,500 clinical research studies and 5,000 researchers and staff, the Feinstein Institutes is raising the standard of medical innovation through its five institutes of behavioral science, bioelectronic medicine, cancer, health innovations and outcomes, and molecular medicine. We’re making breakthroughs in genetics, oncology, brain research, mental health, autoimmunity, and bioelectronic medicine – a new field of science that has the potential to revolutionize medicine.  feinstein.northwell.edu