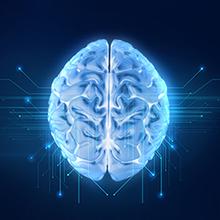 Gainesville, FL – A new University of Florida study finds that 23 percent of adults age 60 and older who underwent a total knee replacement experienced a decline in activity in at least one region of the brain responsible for specific cognitive functions. Fifteen percent of patients declined across all brain networks the team evaluated.

"In essence, normally synchronized parts of the brain appeared more out of sync after surgery," said Jared Tanner, Ph.D., the study's co-lead author and a research assistant professor in the department of clinical and health psychology in the UF College of Public Health and Health Professions, part of UF Health.

Patients who were cognitively weaker before surgery - with worse working memory, slowed mental processing and evidence of brain atrophy as seen in imaging scans - demonstrated the biggest network declines after surgery.

Researchers say they do not yet know if or how patients perceive these network declines. They may contribute to brain "fuzziness" some patients experience right after surgery.

The study, which was published today online ahead of print in the Journal of Alzheimer's Disease, was conducted to help scientists understand the causes of postsurgical cognitive impairment, which causes memory and thinking problems in about 15 to 30 percent of older adult patients, Tanner said. In most cases, these thinking and memory problems will resolve within six months to a year after surgery.

"Our study builds on 50 years of research into how the aging brain responds to anesthesia and surgery," Tanner said. "We know older age and cognitive impairment before surgery are risk factors, but the specific causes are not known."

For the UF study, the team conducted cognitive and brain imaging tests before and after surgery on 48 patients ages 60 and older undergoing a knee replacement. Results were compared with age-matched adults who have knee osteoarthritis, but did not have surgery.

The researchers used resting state functional MRI to look at patterns of blood flow in the brain while patients were lying still. Imaging data helped researchers understand how blood flow changes affected connections across brain networks that are responsible for functions such as memories of oneself and others, determining what outside stimuli deserve further attention, and working memory.

Participants who did not have surgery did not demonstrate any changes across the two brain scans, but 23 percent of participants who had knee replacement surgery showed large declines in connectivity in at least one brain network when tested 48 hours after surgery.

"It was surprising to observe such significant effects of orthopedic surgery on the human brain," said Haiqing Huang, Ph.D., the study's other lead author, a data manager at the University of Pittsburgh's Brain Aging & Cognitive Health Lab and a graduate of the biomedical engineering program at the UF Herbert Wertheim College of Engineering.

The investigators say more research is needed to learn if the brain network changes persist.

"Our goals include investigating if patients who have this brain change after surgery continue to show this change later in their recovery, say at three months or one year after the surgery," said Catherine Price, Ph.D., the study's senior author and a UF associate professor of clinical and health psychology and anesthesiology.

People with concerns about their attention or memory should discuss them with their surgical team, Tanner said. At UF Health, neuropsychologists and anesthesiologists have established what is believed to be the first clinical service to identify older adults who may be at risk of developing cognitive problems after surgery so that health care providers can intervene to lessen the impact.

"We strongly believe clinicians need to consider preoperative memory and attention abilities in their patients," said Price, also the co-director of the Perioperative Cognitive and Anesthesia Network, or PeCAN, service. "Across the nation, however, cognition is not routinely assessed prior to surgery."

There are also actions patients can take on their own, based on previous studies of healthy aging.

"The brain is resilient and there are things we can do to help protect our brains before and after surgery," Tanner said. "Exercise, following a Mediterranean-style diet (primarily vegetables, fruits and whole grains), remaining mentally and socially active and otherwise striving to stay as healthy as possible - all might help patients' brains cope with surgery better," Tanner said.