Previous brain injury may be associated with higher risk of FTD 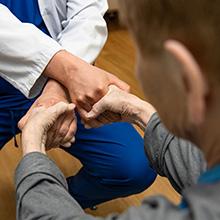 Frontotemporal dementia (FTD) is one of the most common causes of dementia in working-age people. FTD spectrum disorders have, depending on the subtype, major effects on behaviour, linguistic functions and cognitive processing. Many genetic mutations have been implicated as contributing to these disorders, but their non-genetic and thus potentially preventable risk factors remain unknown and scarcely studied.

According to a recent study conducted at the University of Eastern Finland, previous traumatic brain injury may increase the risk of FTD, especially in patients who did not carry a causal genetic mutation. In addition, patients who had suffered a head injury appeared, on average, to develop FTD earlier than others. The researchers compared Finnish FTD patients with patients with Alzheimer’s disease, and with healthy controls. The findings were reported in Journal of Alzheimer’s Disease.

“The results of this study suggest that traumatic brain injury may be a triggering factor for the neurodegenerative processes in FTD. However, clarifying the precise underlying mechanisms still needs further studies,” says Doctoral Researcher and lead author of the article Helmi Soppela of the University of Eastern Finland.

Photo: The photo is from the clinical examination of a patient with memory disorder. Photographer: Raija Törrönen.

About IOS Press
IOS Press is an independent international scientific, technical, medical (STM) publishing house established in 1987 in Amsterdam. We produce around 90 journals and 70 books annually in a broad range of subject categories, primarily specializing in health and life sciences (including neurosciences, medical informatics, cancer research, and rehabilitation) and computer sciences (including artificial intelligence, data science, and semantic web). In addition, we offer specialized services that support scientific advancement. www.iospress.com