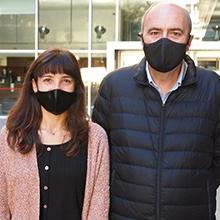 Barcelona, Spain – The effects of the lockdown decreed to deal with the COVID-19 pandemic on the mental health of elderly people in pre-dementia stages were protracted during the de-escalation phase. This is highlighted by an open access study published in the Journal of Alzheimer's Disease, led by researchers from the Hospital del Mar Medical Research Institute (IMIM) and doctors from Hospital del Mar, as well as researchers from the CIBER on the Physiopathology of Obesity and Nutrition (CIBEROBN) and the CIBER on Fragility and Healthy Ageing (CIBERFES). The work was carried out in collaboration with the Barcelona βeta Brain Research Center (BBRC).

The study involved monitoring sixteen people, between 60 and 80 years old, who are participants in the PIENSA study on the prevention of cognitive deterioration in the stages prior to the onset of dementia. None of them suffered COVID-19. Their activity was exhaustively monitored on a daily, weekly, and monthly basis for two months, which made it possible to compare their progression before, during and after lockdown. Subjective cognitive impairment is considered a preclinical stage of Alzheimer's disease and people suffering from this are ideal candidates for dementia prevention trials.

The data obtained made it possible to establish a number of things. "During the months of strict home confinement, all the participants experienced an increase in general psychological distress, in addition to symptoms of anxiety and depression, exceeding the pathological threshold," explains Natalia Soldevila-Domènech, a researcher in the Integrated Pharmacology and Systems Neuroscience research group at IMIM-Hospital del Mar and first author of the study. As a new feature, the monitoring was performed using remote monitoring tools, such as mobile phone applications and fitness wristbands (in particular Fitbit).

Persistent worsening of mental health
The participants' cognitive performance showed no significant changes over the monitoring period. Daily physical activity did vary, and was in fact halved, but this quickly recovered on de-escalation. Sleep hours were also highly variable across the participants.

Mental health aspects worsened during lockdown and continued to decline once the restrictions were eased, sometimes for a period of more than a month. As a result, all the study participants were classified as having a possible mental disorder, whereas before COVID-19 only one fell into this category. At the same time, 56% were likely to suffer, or were close to suffering, an emotional disorder during lockdown, almost twice as many as previously (31%), due to an increase in depressive symptoms.

The aspect that deteriorated the most was mood. In the participants with the worst records, mood continued to decline during the first week of de-escalation and this persisted throughout the study period. Self-perception of mental health also worsened among the participants during lockdown, and this did not change when the restrictions were lifted.

These results are interesting. "The indirect impact of social distancing measures on the mental health of individuals at high risk of suffering Alzheimer's disease may have long-term consequences," analyses Dr. Rafael de la Torre, director of the Neurosciences Research Programme at IMIM-Hospital del Mar, CIBEROBN researcher and final author of the study. At the same time, he says the work confirms: "The method used in this study makes it possible to monitor and understand the impact of these measures on the mental health of the population and to identify risk factors. It is also significant for applying more effective treatments based on personalised medicine and using telemedicine tools."

About the Journal of Alzheimer's Disease
Now in its 24th year of publication, the Journal of Alzheimer's Disease (JAD) is an international multidisciplinary journal to facilitate progress in understanding the etiology, pathogenesis, epidemiology, genetics, behavior, treatment, and psychology of Alzheimer's disease. The journal publishes research reports, reviews, short communications, book reviews, and letters-to-the-editor. Groundbreaking research that has appeared in the journal includes novel therapeutic targets, mechanisms of disease, and clinical trial outcomes. JAD has a Journal Impact Factor of 3.909 according to Journal Citation Reports (Clarivate, 2020). The journal is published by IOS Press. j-alz.com