April 4, 2008 – An innovative discovery has been reported that highlights the problems that oxidative stress resulting from iron cumulated in the human brain can generate in relation with the pathogenesis of Alzheimer’s disease (AD), the brain disorder affecting almost 30 million throughout the world. The results of research carried out by Drs. Manuel Lavados, Patricio Fuentes and Leonel Rojo from the laboratory of Professor Dr. R.B. Maccioni of the School of Medicine of the University of Chile, and the International Center for Biomedicine, together with his colleagues, appeared recently in Volume 13, Issue 2 of the prestigious Journal of Alzheimer’s Disease (JAD).  For several decades this laboratory has been acknowledged as one of the main world contributors to our understanding of AD and the development of tools for its early diagnosis.

The study focuses on the reactivity of iron in the cerebrospinal fluid (CSF) and its correlation with the severity of cognitive decline in both patients with AD and subjects diagnosed with mild cognitive impairment (MCI). Different stages of cognitive and functional impairment are associated with changes in CSF reactive iron.  CSF samples from 56 seniors classified into 4 groups according to their scores on the Clinical Dementia Rating scale (CDR) were compared in respect to the levels of a particular form of iron, the redox-active iron.

Interestingly, redox-active iron levels in the CSF increased with the degree of cognitive impairment from normal to MCI subjects, while AD patients showed an abrupt decrease to levels close to zero. However, no difference in the total CSF iron was found between the different groups. Given the relevance of oxidative damage in neurodegeneration occuring during the course of dementia, the development of cognitive and functional decline appears to be associated with the presence of redox-active iron in the CSF. The abrupt decrease in redox-active iron found in patients affected with AD may represent a terminal situation, whereby the central nervous system attempts to minimize iron-associated toxicity.

A possible mechanism to explain the decrease of redox-active CSF iron during the course of the disease could be the sequestration of this metal by the aggregation of a brain component called amyloid peptides (Aβ) into the senile plaques, anomalous structures where cumulative iron has been found. High redox-active CSF iron levels could increase the production of the amyloid-β protein precursor (AβPP) in the neuronal membrane, while the soluble form of AβPP (Aβ peptide) could act as an iron chelator promoting Aβ peptides aggregation into the senile plaques. The suggested mechanism could represent a homeostatic process by the brain that fights to reduce the cascade of cellular insults in AD, in order to regulate the CSF iron levels and its toxicity. These findings indicate that the decrease in redox-active CSF iron may correspond to a final late effort by brain cells to decrease oxidative stress mediated by iron.

This discovery offers the possibility to monitor iron levels in the CSF in relation with cognitive impairment and perhaps be used as part of a battery of biomarkers for an early diagnosis of these disorders, thus facilitating the appropriate treatment to patients and increasing their quality of life.

A simplified schematic representation of these findings is shown below: 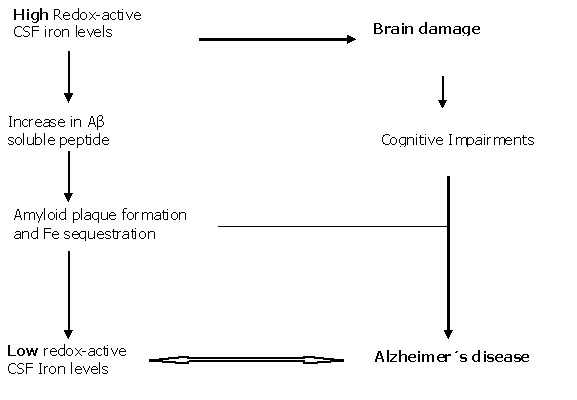