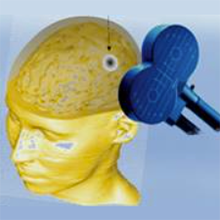 Palo Alto, CA, USA – Current treatments for Alzheimer’s disease are of limited effectiveness and do not halt the progression of the disease and associated cognitive decline. A study, published in the Journal of Alzheimer’s Disease, showed that a novel treatment, repetitive transcranial magnetic stimulation (rTMS), may have the potential of improving the memory function in veterans with cognitive impairment due to Alzheimer’s disease.

rTMS has been previously approved by the FDA for treating patients with treatment-resistant depression. Recent studies also have shown that rTMS may improve cognition. Under the leadership of the Mental Illness Research Education and Clinical Center (MIRECC) Director and Co-Director, Drs. Jerome Yesavage and J. Kaci Fairchild, a team of researchers at VA Palo Alto conducted a pilot study to investigate the effect of rTMS on cognitive impairment in veterans with numerous medical comorbidities. Study participants underwent 20 sessions of rTMS treatment over the course of approximately 4 weeks. The study protocol is like that used for the treatment of depression. Measures of the cognitive function of these veterans (including memory, language, verbal fluency, and executive function) were acquired at baseline, end of treatment, and 4 months after the last rTMS session. The research team found that the study protocol was well-tolerated. Thirty-two veterans with cognitive impairment likely due to early Alzheimer’s disease were enrolled, 29 completed the treatment phase of the study, and 26 (13 in the active rTMS group, 13 in the sham rTMS group) completed all phases of the study and were assessed.

Analysis of study results suggested that patients in the sham group showed an expected, slight decline in memory testing over the course of the study, whereas the active treatment group showed a slight improvement at 4-months post-treatment follow up. However, the active rTMS group also demonstrated a trend in decreased verbal fluency at the end of treatment and at 4-month follow up.

Conclusion: The pilot results show that rTMS is safe in general in this cognitively impaired elderly veteran population with multiple comorbidities, and that there was a suggestion of cognitive benefit for those veterans receiving the active treatment. Given the small sample size, these effects need to be confirmed by larger studies.