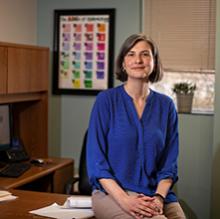 Lexington, KY, USA – It's an irrefutable fact that smoking is bad for you. Study after study has proven that smoking increases your risk for cancer, heart disease, diabetes – even blindness. But dementia? Not so fast. A recent study published in the Journal of Alzheimer's Disease has demonstrated that smoking is not associated with a higher risk of dementia.

Many previous studies have found a correlation between smoking and dementia. However, Erin Abner (pictured) of the University of Kentucky's Sanders-Brown Center on Aging (SBCoA) and colleagues wanted to explore outcomes using a different method of data analysis.

"The underlying data (in those studies) was solid, but the analysis didn't take into account the idea of competing risk of mortality, which we felt was an important factor to consider in this case since smoking is so strongly associated with earlier death," Abner said. Competing risk is a complicated concept which can change how data is "counted" in a study and ultimately change study conclusions.

"If, for example, we were studying cancer deaths and smoking, and one of the people in the study died from heart disease, what do we do with that person's data?" Abner said. "That person can’t possibly die from cancer since a competing event (death from heart disease) has occurred. If we ignore that information, the data are not telling the right story."

"In the case of our study, if smoking kills someone before they show signs of dementia, how can you accurately count that person? We think that those deaths should be accounted for when predicting dementia risk."

To answer that question, Abner et al. examined longitudinal data from 531 initially cognitively-normal people who were part of the SBCoA BRAiNS study, which has followed hundreds of volunteers an average of more than 11 years to explore the effects of aging on cognition. They used a statistical method called Competing Risk Analysis to determine whether there was a connection between smoking and dementia once the competing risk of death was included.

The data demonstrated that smoking was associated with a risk of earlier death – but not for dementia. Interestingly, said Abner, their conclusions support several earlier neuropathological studies, which did not find that AD pathology was more prevalent in smokers.

"To be clear, we are absolutely not promoting smoking in any way," said Abner. "We're saying that smoking doesn't appear to cause dementia in this population."

Abner also noted that while Competing Risk Analysis is well-known and has been adapted successfully in other areas of research, it is not the standard approach in the field of dementia research, where the competing risk of death is ever-present.

"While our study results could influence smoking cessation policy and practice, we feel that the most important consequence of our work is to demonstrate how this method could change the way we approach dementia research and to advocate for its adoption in the appropriate areas of study."

Abner notes that this is not a population-based study, which means that the results don’t necessarily apply to all groups of people in the same way.

"However, the lack of neuropathological data, which is the gold-standard diagnosis for confirming correlations in a large population-based study, is a significant and ever-present barrier for dementia researchers."

The data was published in the March 26, 2019 in the Journal of Alzheimer's Disease.

(published online in advance of the full issue publication) at: content.iospress.com/articles/journal-of-alzheimers-disease/jad181119.

About the Sanders-Brown Center on Aging
The Sanders-Brown Center on Aging was founded at the University of Kentucky in 1972, quickly establishing itself as a national leader in efforts to improve the quality of life for the elderly through research and education. Sanders-Brown has played an instrumental role in several landmark breakthroughs related to Alzheimer's and other dementias, including the discovery that there are changes in the brain decades before there are outward symptoms of the disease. In 1985, Sanders-Brown was among the first 10 Alzheimer's Disease Centers funded by the National Institutes of Health. Currently, only 31 designated Alzheimer's Disease Centers exist in the U.S. and only nine – including Sanders-Brown – has been continuously funded since the designation was launched. At the University for Kentucky, we are educating more students, treating more patients with complex illnesses and conducting more research and service than at any time in our 150-year history. uky.edu/coa

About the Journal of Alzheimer’s Disease
The Journal of Alzheimer's Disease (JAD) is an international multidisciplinary journal to facilitate progress in understanding the etiology, pathogenesis, epidemiology, genetics, behavior, treatment and psychology of Alzheimer's disease. The journal publishes research reports, reviews, short communications, book reviews, and letters-to-the-editor. Groundbreaking research that has appeared in the journal includes novel therapeutic targets, mechanisms of disease and clinical trial outcomes. JAD has an Impact Factor of 3.476 according to the 2017 Journal Citation Reports (Clarivate Analytics, 2018). j-alz.com