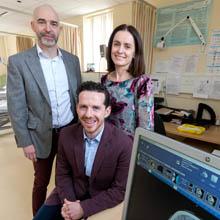 Waterford, Ireland – Ongoing European Research Council-funded research at Waterford Institute of Technology’s (WIT) Macular Pigment Research Group (MPRG) is investigating the potential link between cognitive function and levels of a vital eye pigment linked to diet. The study suggests that measuring macular pigment offers potential as a biomarker of cognitive health. The results of this study are highlighted to a global audience through the prestigious international medical journal, the Journal of Alzheimer’s Disease.

The Waterford clinical trial research, conducted by a team of 10 researchers and healthcare professionals, investigated two patient groups – those free of retinal disease but with low macular pigment and those with early age-related macular degeneration.

A series of tests were carried out on the volunteer trial patients at the analytical and vision laboratories in Carriganore House on WIT’s West Campus where the MPRG is based. These examined the relationship between serum concentrations of the macular carotenoids lutein and zeaxanthin, macular pigment levels in the eye and cognitive function.

The results showed a significant link between macular pigment levels in the eye and various measures of cognitive performance in both groups of patients, while serum lutein and zeaxanthin levels correlated with cognitive performance on only two tests. When the researchers controlled for variables such as age, gender, diet, and education levels, the correlations between macular pigment and cognitive function remained statistically significant, while the correlations between serum lutein and zeaxanthin and cognitive function were no longer significant.

Prof John Nolan, Principal Investigator at the MPRG and a Fulbright Scholar, Howard Foundation Chair and European Research Council (ERC)-funded Fellow, said: “Given the growing prevalence of Alzheimer’s, it is obviously very exciting to be involved in leading-edge research that is opening up new possibilities in terms of detecting patients at most risk of the disease at an earlier stage than has previously been possible.

“The opportunity to disseminate our research to a relevant worldwide audience through this publication in the Journal of Alzheimer’s Disease is particularly welcome as we continue exploring the potential connections between macular pigment in the eye and cognitive function.” The study is published online ahead of the September issue.

Dr George Perry, Editor-in-Chief of the Journal of Alzheimer’s Disease, commented that the surprising and novel result of this study opens new therapeutic and conceptual insights to benefit patients in the near term. A respected neuroscientist, Dr Perry is Dean of the College of Sciences and Professor of Biology at the University of Texas at San Antonio.

ABOUT THE JOURNAL OF ALZHEIMER’S DISEASE (JAD)
The Journal of Alzheimer's Disease (http://www.j-alz.com) is an international multidisciplinary journal to facilitate progress in understanding the etiology, pathogenesis, epidemiology, genetics, behavior, treatment and psychology of Alzheimer's disease. The journal publishes research reports, reviews, short communications, book reviews, and letters-to-the-editor. Ground-breaking research that has appeared in the journal includes novel therapeutic targets, mechanisms of disease, and clinical trial outcomes. The Journal of Alzheimer's Disease has an Impact Factor of 4.151 according to Thomson Reuters' 2014 Journal Citation Reports. The Journal is published by IOS Press (www.iospress.com).