A blood test based on the proprietary Multimer Detection System (inBlood™OAβ test, PeopleBio, Inc., South Korea), a modified Enzyme-Linked Immunosorbent Assay (ELISA) using capturing antibodies and epitope-overlapping detection antibodies for the selective detection of OAβ over Aβ monomers was used to measure the Aβ oligomerization tendency levels in the plasma. Data were analyzed using GraphPad Prism 5.01 (GraphPad, La Jolla, CA, USA). Differences between groups were analyzed using Kruskal-Wallis test. Wilcoxon signed rank tests were used for comparison between the two groups. The study was conducted in accordance with the guidelines of the Declaration of Helsinki, and was approved by the Ethics Committee of Seegene Medical Foundation, Seoul, Korea (SMF-IRB-2020-011). 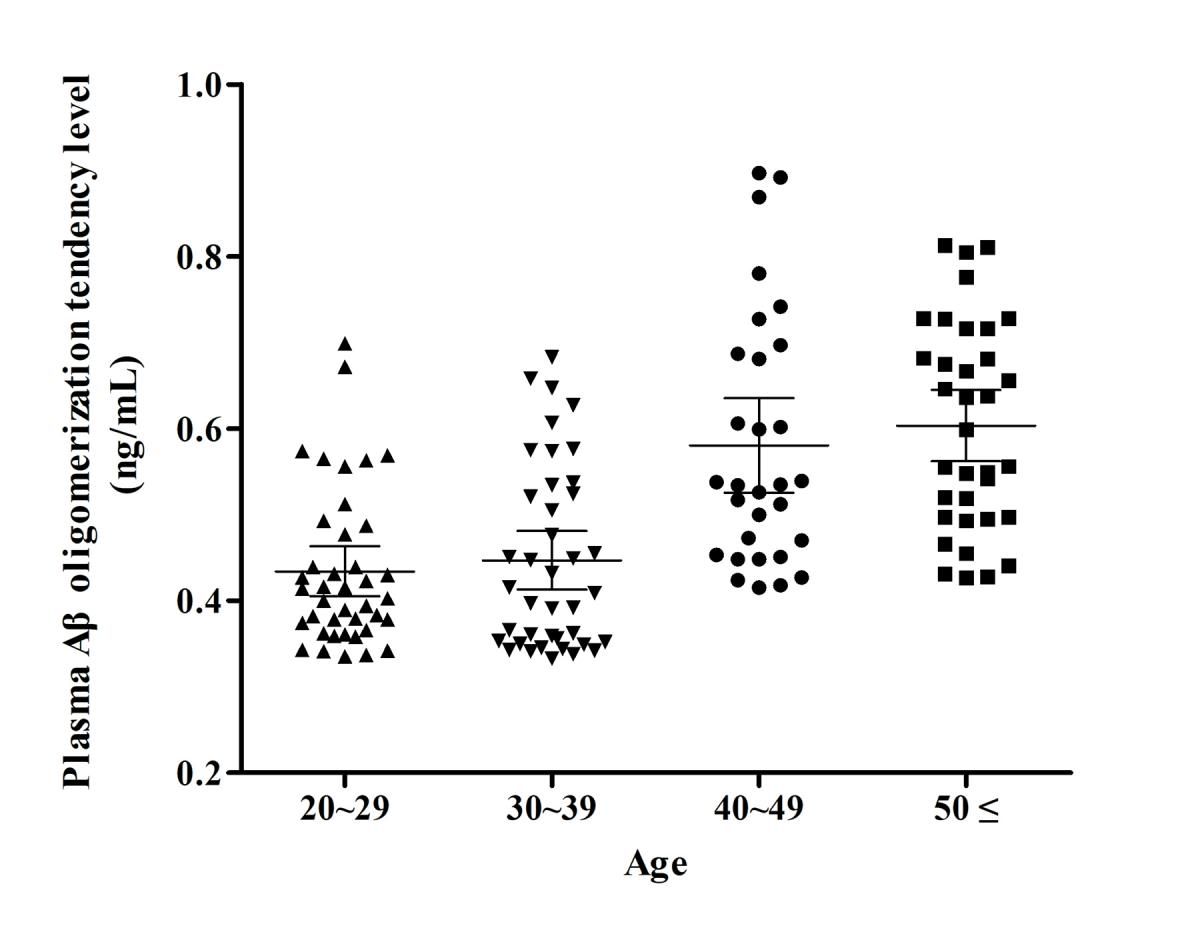 The analysis showed that plasma Aβ oligomerization tendency levels increase with age. In particular, the groups aged 40 and older showed statistical increases. This is presumed to be brought on by the increase in OAβ production or decrease in OAβ clearance due to the spike in chronic conditions and the drop in metabolism in individuals over the age of 40 [5]. It is likely for the resulting surplus of OAβ to travel through the blood-brain barrier and accumulate in the brain. A recent review provided evidence that AD pathological changes are triggered by amyloidopathy caused by peripheral Aβ that travels through the CNS [6]. Therefore, the findings in this study imply that there is an association between the cause of increasing AD prevalence rate with age and the increase in plasma Aβ oligomerization tendency levels.

Blood-based biomarkers will be the holy grail in the field of Alzheimer’s disease (AD) research and practice, once the adequacy of their sensitivity and specificity is proven. In addition, an ideal diagnostic biomarker for AD should detect the fundamental features of the molecular pathogenesis of AD. Therefore, reliable blood-based biomarkers of AD should be derived from amyloid-β (Aβ).

According to recent studies, peripheral Aβ-related markers are suitable for the evaluation of cerebral amyloidopathy even at the preclinical stage of AD. There are three types of blood-based, amyloid-targeting AD markers. The first method involves measuring Aβ related molecules (Aβ1-42, Aβ1-40, or other APP fragments) and calculate their ratios. Highly sensitive ELISA techniques or specific mass spectrometry are being used for this. The second is measuring the ratio of α-form to β-form amyloid in the peripheral circulation. The last technique is observing increasing tendencies of oligomeric forms of Aβ in plasma after spiking synthetic Aβ peptides.

The comment written by Dr. Minn & Dr. Kim noted that this oligomerization tendency is shows a slight increase with age in healthy normal subjects in his study. This is a very important finding we should keep in mind. As glycated hemoglobin (HbA1C) for diabetes mellitus, this oligomerization tendency of Aβ in plasma measured by MDS-OAβ could be used as a monitoring marker for preclinical AD pharmacotherapy in the near future. In this situation, Dr. Minn & Dr. Kim’s findings are very important to establish the management guideline according to age.

There are two possible explanations for the increased oligomerization tendencies by age; one is the possibility that there were some preclinical AD patients in the older healthy normal subject group. Because cerebral amyloidopathy may begin 15~20 years before the onset of clinical symptoms, and amyloid PET studies also found some positive cases without clinical symptoms at older population group.

Another possibility is that there may be physiological increases of Aβ oligomerization tendencies according to age. We may explain this increasing tendency by increased production of Aβ or many factors related to oligomerization, or decreased clearance of Aβ or decreased inhibiting factors of oligomerization. However, at the moment, there isn’t enough evidence to definitively explain the mechanism; more time is needed for additional research regarding this.

In conclusion, this comment including good data showing the increased oligomerization tendency of Aβ in plasma by age is a good reference upon which to establish diagnosis or treatment guidelines using MDS-OAβ.